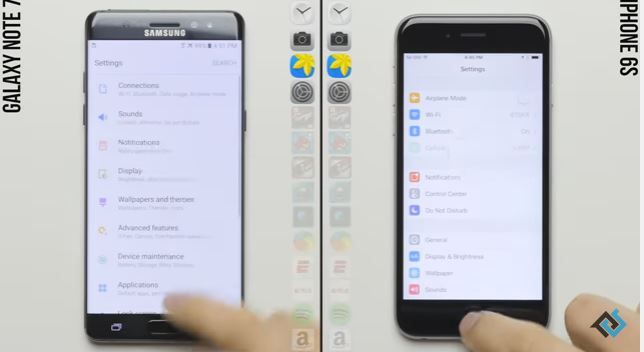 Samsung is understandably proud of its new Galaxy Note 7, and the reviews have certainly been rapturous as always, but as BGR writes, despite Samsung's latest phablet's much-touted many bells and whistles, it still isn’t as fast as the year-old iPhone 6s.

PhoneBuff performed a simple app-opening benchmark test on the Note 7 and iPhone 6s, opening apps on each of the phones in a particular order, and then reopening them using memory in the same order. PhoneBuff’s results show that the iPhone 6s breezed past its much younger rival.

It’s worth noting that the Galaxy Note 7 used in the test isn’t running the very latest Android software, 7.0 Nougat, which isn’t out yet. Also, it would be interesting to see if the Galaxy Note 7 also lags behind its direct phablet competitor, the iPhone 6s Plus, rather than the smaller iPhone 6s. However, the results would most likely still have been very similar.

Elsewhere, xda-developers put the Galaxy Note 7 through an even more rigorous series of benchmarks, and weren't impressed at all, referring to the phablet’s “embarrassing real-world performance” and stating, “considering that Samsung packs the cream of today’s processing power with its UFS 2.0 storage, LPDDR4 RAM and the Snapdragon 820, we can begin to entertain the notion that something went wrong with Samsung’s implementation.”

They're still trying to win the specifications war and can't seem to realize that what really matters is real world performance.

scifan57 said:
They're still trying to win the specifications war and can't seem to realize that what really matters is real world performance.
Click to expand...

I like their Note series and it has improved drastically IMO most are good with performance day to day ... but it would be nice to see it stripped down further