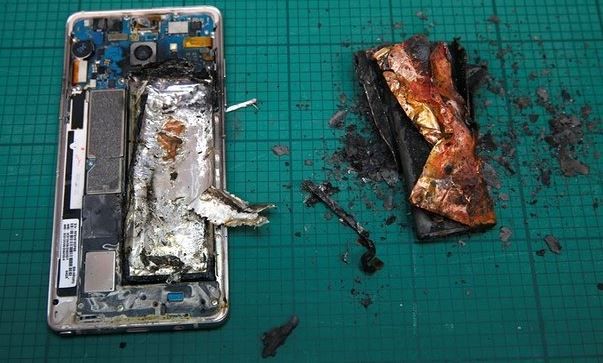 Disastrous news for Samsung today as AppleInsider reports that the company has finally taken the step of not just recalling the Galaxy Note 7, but permanently discontinuing it.

“We recently readjusted the production volume for thorough investigation and quality control, but putting consumer safety as top priority, we have reached a final decision to halt production of Galaxy Note 7s,” said Samsung in a statement. “For the benefit of consumers’ safety, we stopped sales and exchanges of the Galaxy Note 7 and have consequently decided to stop production.”

AppleInsider heard from AT&T store managers who expressed their anger at how Samsung has handled the whole situation.

“Those Samsung guys? They’re not here,” one store manager raged to AppleInsider. “We’re getting the brunt of this, telling people that they can’t get a Note 7, and before that, that we didn’t have anything to give them in exchange. I can’t even tell you how many people have yelled at me because the Note 7 was garbage.”

It is thought that the financial losses to Samsung as a result of the exploding phones could be in excess of $19 billion.

Samsung’s loss is Apple’s gain, however, as the managers of the AT&T stores told AppleInsider that there had been 107 Galaxy Note 7 exchanges, 82 of those being since Samsung had allowed other brands of phone to be exchanged for the Note 7. The majority of those switching had chosen to switch to iPhones, with 72 of those choosing either an iPhone 7 or an iPhone 7 Plus.

“This has probably killed the Note 7 brand name,” said Edward Snyder, managing director of Charter Equity Research. “By the time they fix the problem they have to go through recertification and requalification and by the time that happens, they’re going up against the S8 launch.”

Talk about good timing, It couldn't have come at a better time for Apple, They will be very happy.

It wasn't until l got to the last line, of the article l was already thinking about Nokia, could this be the start of an end ? I for one would never buy a Samsung.

Last Samsung device I owned was a computer monitor. It died within hours of the warranty expiration. Now it's LG all the way for me.

My wife has a Samsung phone of some kind, no idea which one. It hasn't been too much trouble, leaving aside the fact that it has the habit of changing one of its settings and sucking up a huge amount of cellular data.

Do you think owners are wondering more about the safety of their Samsung phones now than before this came out?

brixtonboy said:
Do you think owners are wondering more about the safety of their Samsung phones now than before this came out?

Perhaps. Maybe I should buy the wife a fire extinguisher for Christmas.

And an iPhone 7plus

Or a fire blanket, I think they come in different colours

Or a case with a built in fire extinguisher.

I really don't know why she has never had one. She went from Blackberry to Samsung, and has never considered an iPhone.

KevinJS said:
I really don't know why she has never had one. She went from Blackberry to Samsung, and has never considered an iPhone.
Click to expand...

Perhaps she has never known the benefits of having an iPhone - that's where I was in 2012. You are in the perfect position to act as a tutor regarding the benefits of iOS and iCloud.

I went through firefighting school in the Canadian navy and the most spectacular part was the backdraft fireball when the door was opened wide in the burning mock up of ships compartments to demonstrate how not to open a door at a fire scene.
You must log in or register to reply here.