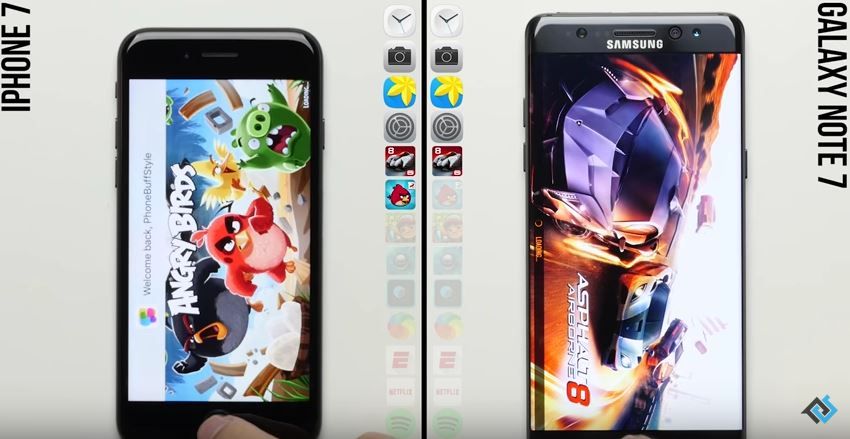 BGR writes that the iPhone 7 has had some spectacular results in a new real-world speed test carried out alongside the Galaxy Note 7 by YouTuber “PhoneBuff.”

As BGR explains, PhoneBuff pretty much invented the idea of a smartphone speed test that is designed to measure smartphone performance in the real world in comparison with other smartphones. His thinking is that, while interesting, benchmark tests don’t really give us any idea of how a phone might perform in the real world, with rigorous benchmark tests not really suitable to test a phone’s performance when it comes to opening and switching apps, which is what everyone does most of the time when using their phone.

PhoneBuff shows himself in the video setting up a “lap,” where he opens the same apps on two separate phones, and notes exactly how long it takes. In the second lap he tests how well the phones hold apps in their memory and then relaunches them.

The result was a resounding victory for the iPhone 7, as you can clearly see in the video posted below, with Apple’s phone coming so far in front of its Samsung rival that BGR called it “embarrassing.”

That's what happens when the emphasis is on statistics not performance. The Galaxy Note 7 has much better statistics on paper but the performance doesn't live up to those statistics.

That's what happens when you load your hardware down with bloatware.

03hdfatboy said:
That's what happens when you load your hardware down with bloatware.
Click to expand...

That's the biggest downside of an open source operating system like Android. It allows the manufacturers and carriers to play around with the code in ways that affect performance and stability.
They'll often install the bloatware on the system partition so it can't be deleted and then lock the boot loader so you can't undo the changes they made.
Last edited: Sep 21, 2016
You must log in or register to reply here.