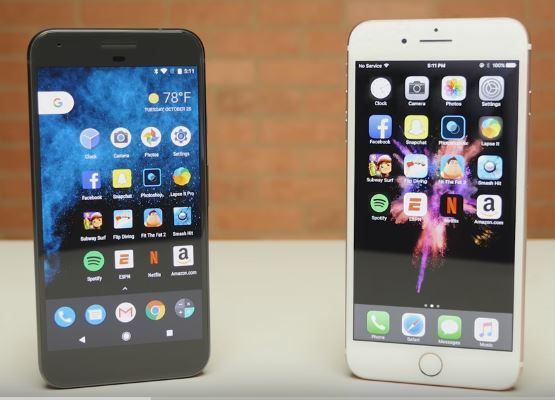 BGR writes that the iPhone 7 Plus has once again been pitted against Google’s new Pixel XL phablet, this time in a real-world speed test, and has simply blown away its rival.

The new test comes from YouTuber PhoneBuff, who has posted a video on YouTube of himself putting the two phones through their paces.

In the video, David Rahimi aims to show how well the two phones perform in real-world situations, primarily opening, switching, and closing apps. You see him opening and closing apps very quickly, and right from the start of the video you can see how well the iPhone 7 Plus performs in terms of speed, pulling out in front of the Google Pixel very early on in the test, loading the Photoshop main website much faster than the Google phablet does. He then goes on to show the iPhone 7 Plus loading games such as Flip Diver and Subway Surfers 4 seconds and 6 seconds faster respectively than the Pixel XL. The final tale of the tape is that the iPhone 7 Plus finished the speed test in 1 minute and 55 seconds, while the Pixel XL struggled to keep up, not even managing to keep all apps open, unlike the iPhone 7 Plus, which did, and eventually finishing in 3 minutes and 5 seconds. Once again, the iPhone 7 Plus proves to be the fastest smartphone around.

While Apple could potentially have designed the phone to perform well in regularly bench tested areas, there's nothing like a real world head to head to show what matters to consumers.
You must log in or register to reply here.

iPhone 6s Plus Beats iPhone 6 Plus in Speed Tests