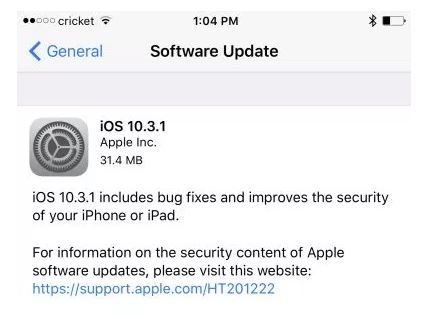 9to5 Mac reports that Apple has today released iOS 10.3.1, which brings back support for 32-bit devices, as well as featuring other bug fixes.

When iOS 10.3 was released it did not support 32-bit devices, but that has now been rectified with the latest update, which restores 32-bit device support for iPhone 5 and iPhone 5c. Last week Apple released the iOS 10.3.2 beta 1 for developers. At that time one might have been forgiven for thinking that Apple had missed out on iOS 10.3.1 entirely, but now the reason for the jump to iOS 10.3.2 has been made clear.

Apple’s limited release notes state that the update also fixes a Wi-Fi vulnerability that was found by Gal Beniamini of Google Project Zero, whereby a person with malicious intent that was in range would be able to execute “arbitrary code on the Wi-Fi chip.” Describing how it fixed the vulnerability, Apple said that “a stack buffer overflow was addressed through improved input validation.”

iOS 10.3 was not available as an OTA update for 32 bit devices but could be installed through iTunes on your computer.
Last edited: Apr 3, 2017
You must log in or register to reply here.

Apple Releases iOS 7.1.2 with Improved iBeacon and Other Bug Fixes