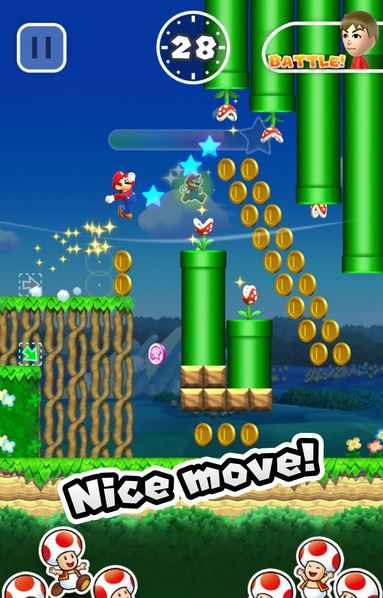 “Oh yeah! Mario time!” Those four magic words that we’ve been waiting to hear for so long, as Super Mario Run finally arrives in the App Store for iPhone and iPad. And what a wonderful treat it is, just hearing that high-pitched battle cry from the world’s most famous plumber, the music and sound effects so familiar from beloved Super Mario games of the past, and the sheer joy of seeing all the other much loved denizens of Mario’s world, including the ever panicking Toads, popping up in the game.

I don’t want to give away too much of the opening sequence, which really is everything a Mario fan could have hoped for on their iPhone or iPad, but let’s just say that Mario clearly hasn’t learned one vital lesson from the past, which is that attending one of Princess Peach’s parties is never a good idea! Just a few seconds in and we’re already meeting a very familiar foe of Mario’s…can you guess who it is??!

The game looks positively gorgeous and bright, the music is so good you’ll want to leave it running just to hear it, and for fans of the Mario and Nintendo universe as a whole, the humour in the dialog is also pitched exactly right, in short it feels like you’re playing a classic Mario game certainly in terms of the look and the storytelling.

The gameplay is, of course, very basic and very simple, being an endless runner, but it has been designed so that you have just the right amount of control and skill to prevent it from becoming boring or too frustrating. I still would have preferred it to be a side-scrolling platformer rather than an endless-runner, but this is certainly a great start, and hopefully Nintendo has something like that in the (green) pipeline, maybe even featuring Luigi, perhaps? We can but hope.

If I buy the worlds... will it share them with my family??
You must log in or register to reply here.