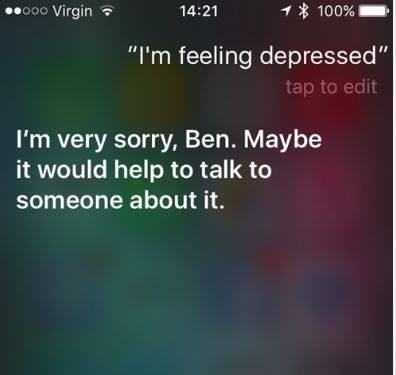 According to a report on 9to5 Mac today, researchers have been testing Siri’s ability to respond to personal and medical emergencies, and have found that it has greatly improved since an initial survey was carried out by Stanford university a year ago, but that it is a long way off being perfect.

In last year’s research, it was found that Siri, as well as rival intelligent assistants such as Cortana and S Voice, far too often did not recognize when someone was in need of help, and would either make flippant quips or provide a sometimes too clinical response in the form of a web search when someone had said they were depressed, for example.

Stanford clinical psychologist Adam Miner, who was the lead author of the year-ago study, said that he had definitely seen improvements since the report was published.

“Siri now recognizes the statement ‘I was raped,’” said Miner, “and recommends reaching out to the National Sexual Assault Hotline.”

Miner added that he wants companies such as Apple to do even more to help with this issue, however, such as creating industry-wide standards for intelligent assistants recognizing emergencies and offering useful responses. “Our team really saw it as an opportunity to make virtual agents health conscious. Getting that person to the right resource is a win for everyone.”

Source: https://9to5mac.com/2016/12/28/siri-medical-emergency-personal-crisis/
You must log in or register to reply here.