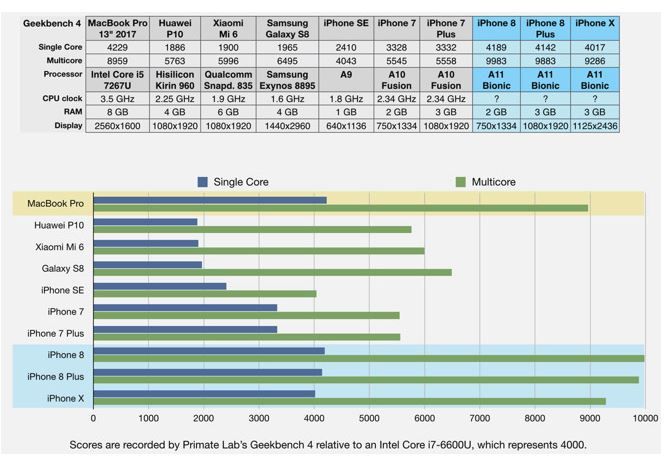 AppleInsider reports today that newly posted official benchmarks from Geekbench for Apple’s new A11 Bionic chip, which is used in the iPhone X as well as the iPhone 8 and iPhone 8 Plus, have revealed the chip to be blisteringly fast.

The figures show that the A11 Bionic is not just way ahead of last year’s A10 Fusion chip used in the iPhone 7, as might be expected, it also blows away not just the latest chips from Apple’s mobile competitors, but also the base Intel Kaby Lake Core i5 of the 13-inch MacBook Pro.

Of course, just because the A11 Bionic chip is faster than the MacBook Pro’s Intel Kaby Lake chip it doesn’t mean that the iPhone X or iPhone 8 can do everything that a MacBook can do, and it has to drive a much more bigger display with a much higher resolution, but still impressive results, even so.

As far as the A10 Fusion is concerned, the benchmark results show that the A11 Bionic is 25% faster in single core and 80% faster in multicore scores, all this while also coping with new neural net, camera ISP, and GPU capabilities.

That's a big jump! I thought my 6+ was feeling slow...now I can't wait to get my X
You must log in or register to reply here.