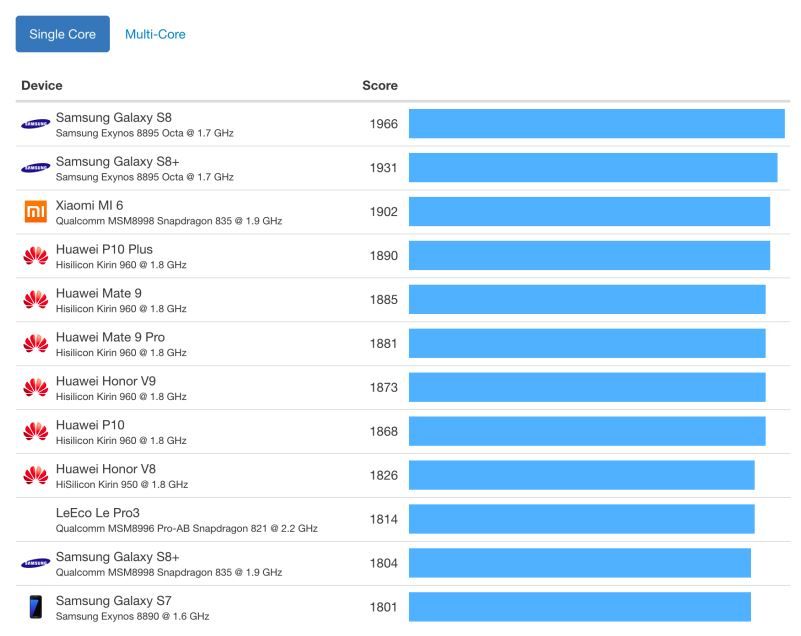 BGR writes that a leaker known as “Ice Universe,” who has been accurate with information before, has tweeted out what looks very much like preliminary benchmarks for the forthcoming iPhone 8, saying “Apple A11 Geekbench4, 4600, 8500 and 4300,7000. This is two different clock frequencies, and the final result may be between the two”

As BGR explains, Primate Labs’ Geekbench4 is a very popular test that is widely used to measure the overall performance of a smartphone. The first number in each of the two tests is the single-core result, and the second number is the multi-core result. In other words, according to Ice Universe, the new Apple A11 chip scores between 4300 and 4600 in single-core tests, and between 7000 and 8500 in multi-core tests. He then explains that the two sets of results are different because each test had a different clock speed.

As to exactly what this means, BGR posts a chart that shows single-core and multi-core results for various current Apple devices, revealing that the A11 benchmarks reveal single-core performance levels that are even more powerful than the latest iPads. In multi-core tests, the A11 iPhone 8 chip still manages to beat the current iPhone 7 and iPhone 7 Plus, but doesn’t quite manage to beat the latest iPads.

Things are even better in terms of Android phone benchmark results, which show that the highest scored current Android phone, the Samsung Galaxy S8, has a single-core score of just 1966, although it does a little better as far as the multi-core results are concerned, with 6502, but still can't manage to beat the A11's results.

Source: New leak shows iPhone 8 performance that completely crushes every Android
You must log in or register to reply here.

New Performance Benchmarks Show the Total Dominance of the iPhone 7