Well this is a nice present from AT&T just in time for Thanksgiving in the US! MacRumors reports today that AT&T seems to be starting to allow all its customers to use FaceTime-Over-Cellular. You might recall that earlier in the month AT&T said that customers would have to have one of their tiered data plans in order to be able to use FaceTime-Over-Cellular, which is one of the features of iOS 6. Now though, MacRumors says that they have heard from one of their forum members, kre62, that despite the fact that he or she has an unlimited data plan with AT&T, and not a tiered plan, they are suddenly able to use FaceTime-Over-Cellular on their iPhone 4S and iPhone 5. The poster says that the service works perfectly over cellular, and confirms that it is not just a one-off as they have checked with co-workers and found that they can all also use FTOC. It seems that the roll out is a little patchy though, and may not have reached some areas, Some people have also reported that they had to restart their phones in order to get the service to work. MacRumors says that it has contacted AT&T to find out if this is actually an extension to the service for real, and not just a glitch, but has not heard back so far.

Source: AT&T Seems to Be Extending FaceTime-Over-Cellular to All Customers - Mac Rumors

I wonder how many customers had to leave the AT&T before they got the hint.

Hasn't been pushed to my area yet... 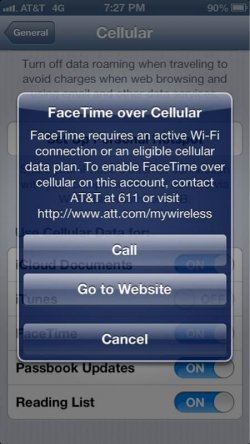 Only took a few tens of thousands of pissed customers for them to go "OOOOOHHHHH. Let's unblock it"

Verizon had that already sure thought AT&T would too
You must log in or register to reply here.

FaceTime Will Work over 3G in iOS 5