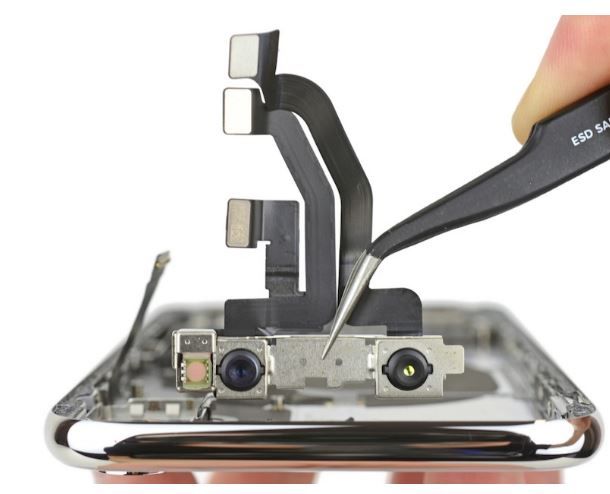 MacRumors reports that teardown experts iFixit have completed the first iPhone X teardown, revealing the first inside look at the innards of Apple’s new flagship phone.

First things first, the teardown revealed that, as with all other iPhones since the iPhone 7 Plus, the iPhone X opens sideways with a single bracket.

iFixit found that the mini logic board is very neat and uses space very efficiently, with connectors and components packed in. The iPhone X logic board is apparently around 70% smaller than the iPhone 8 Plus logic board.

All that extra space is used to house the new L-shaped 2-cell battery pack, which is bigger than the iPhone 8 Plus battery pack.

The teardown also provides a revealing look at the TrueDepth camera system responsible for Face ID, so we finally get to see what lurks beneath the “notch,” and how the revolutionary 3D facial recognition system works.

The inductive charging coil is also visible in the teardown photos, as are a variety of other components such as the custom A11 Bionic chip, the Qualcomm Snapdragon X16 LTE modem, and the Cirrus Logic audio amplifier.

iFixit awarded the iPhone X a “repairability score” of 6 out of 10, praising the fact that its possible for a cracked display to be replaced without having to remove the Face ID biometric hardware, but docking points for the way in which the cables are used to tie unrelated components together into complicated arrays that are difficult and expensive to replace.

Source: iPhone X Teardown: TrueDepth Camera System, Stacked Logic Board With 3GB RAM, and 2,716 mAh Battery
You must log in or register to reply here.

iPhone 7 Teardowns Reveal Many Secrets About the New iPhones

iFixit Is Already Tearing Down the iPhone 5