Im running Windows Vista Home Premium on a Dell M1530 laptop. I tried to upgrade my iPhone 4 to IOS 5, earlier today. First, I upgraded iTunes to 10.6.3.25 and rebooted. Then when I plugged in my iPhone, it asked me did I want to upgrade to IOS5. I clicked yes. In iTunes, it said it was upgrading, and would take 33 minutes.

After 33 minutes I got the message, Windows needs to install driver software for your Apple Mobile Device (Recovery Mode). When I click on Locate and Install, it asks me do I have the installation disc. I click no. It then tries to find it on Windows Update, then on my PC. It doesnt find it in either place.

I found a potential solution online, which suggested I click on "Ask me later" when windows ask me for the device driver. Then it said to go into Windows Device Manager and try updating the device driver from there, pointing it to the directory, C:\Program Files\Common Files\Apple\Mobile Device Support", but this doesnt work, it doesn't find it ther eeither. The phone will not switch on when disconnected to my laptop. When connected to my laptop, it displays a picture of a USB connector pointing to the iTunes logo.

I would download the 5.1.1. Ipsw to desktop
DFU Restore to that ipsw.

cherlloydfan1 said:
I would download the 5.1.1. Ipsw to desktop
DFU Restore to that ipsw.
Click to expand...

Exactly. Download 5.1.1 to your desktop then plug your iPhone in while it is in DFU mode. Then restore it with the iOS 5.1.1 Ipsw file that is on your desktop. That should work
OP
B

I downloaded the file iPhone3,1_5.1.1_9B206_Restore.ipsw to my laptop. I successfully entered DFU mode. I got the message, "iTunes has detected an iPhone in recovery mode. You must restore this iPhone before it can be used with iTunes." I clicked OK. The iPhone now appears in the menu on the left. Under version, I have the option to Restore. I hold down the shift key and click Restore, and I navigate to the ipsw file just downloaded. I then get the message, "iTunes will erase and restore your iPhone to iOS 5.1.1 and will verify the restore with Apple."

Does this mean that everything on my phone - photos, will be lost? My contacts are on my laptop and I presume the apps I've bought and downlaoded before will just download again.

Yep. All you have to do us sync your music,apps,tones etc. then use icloud for contacts once you are on iOS 5
OP
B

Is there any way I can retain my photos?
OP
B

and will ally my text messages, call history also be gone?

backinhumanform said:
and will ally my text messages, call history also be gone?
Click to expand...

backinhumanform said:
Is there any way I can retain my photos?
Click to expand...

Yes. Do not restore from a backup tho. Ios 4 backup on ios 5. Isnt recommended. Transfer them to the computer. Use a free tool called 'iTools'
OP
B

I clicked on OK to restore, and iTunes started extracting the sfotware. Then it said it was verifying the change with Apple. Then the message popped up asking me to install device drivers again. I didn't click any of the three options, I let iTunes continue doing its thing. After a minute or two more, it came up with the message, "The iPhone could not be restored. An unknown error occured (1062)". There's a button for more information, which brings me to Apple's website. The details are here:

What's worrying is the vagueness of the instructions here - they think it may be something to do with the USB cable, or USB connection. I plugged the iPhone into a different USB port using a different USB cable, and proceeded with the same steps, but the same error message, 1602, came up again.

When I look at the Device Manager on my laptop, there are two entried for Apple Mobile Device, both of which relate to this iPhone. I don't know if this helps, but it seems significant. There should only be one entry here. I've attached a screen shot. 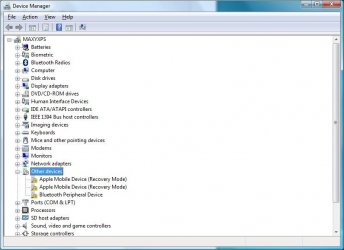 Always sync/backup your data with iTunes regardless if your restoring to new device or not.
Last edited by a moderator: Aug 21, 2012
OP
B

Well, I got it sorted in the end. I rang the Vodafone helpdesk (Vodafone is the network I'm with) and spoke to someone on their iPhone support team.
They took remote control of my laptop and removed iTunes, QuickTime, Apple Software Update, Apple Mobile Device Support, Bonjour, Apple Application Support (iTunes 9 or later), in that specific order. They were very clear about it being done in that order. After re-installing iTunes, I reconnected my iPhone, and...same problem. It wouldn't install the device drivers. So the helpdesk person suggested I do it on another PC, if I had one. I have an old Dell Inspiron 6000 laptop, so I re-did the steps on that - uninstalling iTunes etc in the same order, and reinstalling the newest version of iTunes. Then I plugged in my iPhone, and the laptop automatically detected that it was in recovery mode. It downloaded iOS 5.1.1 and installed it. It then restored my iPhone. My iPhone was now ready to use but it still hadn't activated - I got the message from iTunes that it was unable to activate it at this time and to try again later (Given the problems thus far, I was worried that this might be a continuation of those problems). But I left it for a few hours and re-activated it from my regular laptop - the one which wouldn't recognise the device drivers - and it went smoothly. Unfortunately, when I tried to switch off my old laptop, I got the dreaded blue screen of death. The limited information available online suggests that it was caused by the Apple device driver, and when I switch it on now, I immediately get the same BSoD. The solution to this may be to reinstall Windows but there was nothing important on that laptop anyway and I only use it in emergencies.

Incidentally, someone above recommended against restoring a iOS 4 restore into an iOS5. iTunes gave me the option of choosing between restoring my old restore (made on August 19th) or erasing the phone and starting anew.
It then chose for me, choosing the restore, and no matter what I did, would not let me abort it. The phone works fine though, even with the old restore. So I'm not sure why someone else had problems and I didn't.
Different applications perhaps? I don't know.

Given the problems installing the new OS, and having used the new OS for a number of days now, it wasn't worth the bother, IMO.

This is yet another reason many people don't upgrade their iOS. This is ridiculous! Thanks Apple.

backinhumanform.... did you find a definitive reason WHY this upgrade didn't take place? Do you suspect Windows (drivers, OS, anything??) or something else. Perhaps your iPhone wasn't in "good" condition.... or an iTunes glitch. Any idea? I'd really like to go from my iOS 4.1 to iOS 5.+ but these kind of anecdotes just keep popping up. Comments?
You must log in or register to reply here.

R
how to install ios 5 on jailbreaked iphone 4