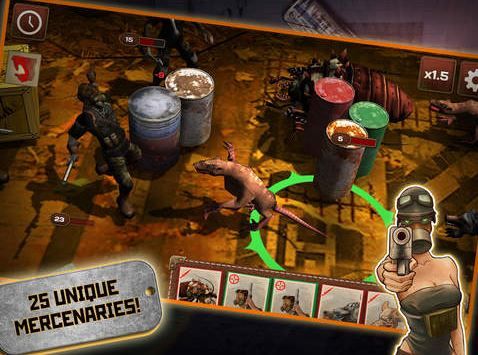 Just like the console games, Metro for iOS is set in an unremittingly grim post-nuclear dystopia deep under the earth in the Moscow Subway. The gameplay is more turn-based strategy than first-person shooter, however, with the developers, TapStar, saying that they were influence by Fallout 1 and 2 and the early XCom series, which gives you a good idea of what to expect.

“I have always dreamt about an RPG created off my Metro novels” said Glukhovsky. “The setting was a perfect fit: various factions fighting for survival and dominance in the tunnels and stations of Moscow subway, the humanity’s only refuge after a nuclear war….But what DaSuppa made with Tapstar’s help exceeded all my expectations. I definitely recommend it for all of my readers. And it’s a great initiation to the Metro world for those who hasn’t entered it yet.”

“We’re thrilled to finally bring Metro 2033: Wars to mobile platforms” said Chris Gray, TapStar Interactive CEO. “This is a true console game, on mobile, designed to appeal to core gamers. The open-world gameplay has a massively deep tech tree for building squads and stations, rich Metro 2033 lore and a fully developed world that stands on its own. There’s countless gamers searching the app stores for console-like experiences that can travel with them on-the-go, and we believe this is exactly what they are looking for.”
Click to expand...