Here was my experience from yesterday, 10/14/11, on getting my iPhone activated:

I received my new phone from UPS at 10:10am and after backing up my old 3gs phone and making sure it was turned off to not interfere, I opened up and tried to activate the 4S. I got the following: 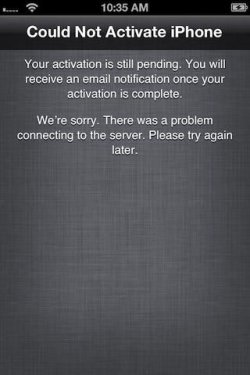 Could Not Activate iPhone


We're sorry. There was a problem
connecting to the server. Please try again
later.

After multiple tries, and not seeing much info online, I decided to call AT&T. Oh boy, here we go...

So the tech searched his chat rooms in AT&T and I waited on the phone, trying to continuously activate, figuring it was just busy servers and maybe I could get in eventually. Nope.
After the tech talked to a few people, he didn't have much more of a solution besides waiting. He told me to call back if still having problems after an hour.

12:00 to 1:00pm, I kept trying. Through the iTunes store and through the phone itself. I even tried booting phone into DFU mode and restoring phone. still got same error.

1:23pm - called AT&T at 800-331-0500
call duration: 26 mins
I called to get a credit because I saw "Zachoz" post about getting $25 credit. I chose other problems, then other again on the IVR.
I got a lady who refused to give a credit and said I should wait to activate. Then after 24 hours if there was still problem, she might be able to give me a credit.
I insisted on getting a supervisor on the phone and she said there was none available. I asked to be transfered to a voicemail of a supervisor and said that wasn't possible. I said I could wait on the phone for one until they were available. She put me on hold, and the call was dropped after a few minutes on a very choppy hold music.

1:52pm: got error:"The SIM card in your iPhone does not match the SIM card associated with your account. " 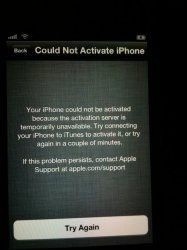 I chose Tech Support, thinking that this is a new error and I got a really lovely person, that verified the sim in my phone was indeed what was on my account with AT&T. I asked for a credit and after being on hold a few times, I received a $25 credit and 1000 roll-over minutes.
After trying things on her end, she transfered me to the activation line (866-895-1099).
They verified the same numbers and said it was something on Apple's end so she told me to call them.

[NOTE] I received a phone call during this call from "UNKNOWN CALLER." I didn't answer but later found out it was the AT&T rep who dropped my call. Thanks for trying to call back.

2:56pm - called AT&T at 800-331-0500
call duration: 47 mins
Talked to tech support again and told them the story. We tried removing SIM again and verified numbers. I even saw people were adding old number back to account then reactivating with new SIM number.
We tried that and nothing. She kept checking other sources and eventually came to conclusion that my SIM was bad and I needed to go to store to replace.
She said she noted my account so I wouldn't have to pay for a new one.

4:30pm - I got in the car and went to nearest AT&T store. I arrived at AT&T authorized retailer (Not corporate store).
The guy who helped was really nice and we went through all kinds of different things and tried multiple SIM cards.
The rep said I would need to go to Apple Store and they would probably swap out for a new phone.

Ugh. I'm tired. The Apple Store is 45 minutes away, but I need a phone since my old one won't work.

5:15pm - arrive at the Apple Store and of course everyone is friendly and I talk to someone who said if I wait 30 mins, they could get me an appointment. So I played on new iPad and 2 mins later there was an opening.
I talked to Lance or Landon, sorry don't remember the name but the employee number was 1337013653.
He took the phone to the back and tried what he needed.
He came back and said the servers were busy and needed to wait.
He suggested I go home and try for a day and if by tomorrow, it doesn't activate then setup an appointment and swap phones.

So I explained to him what happened and explained that I was exhausted and really frustrated. That if I had to go home (45 min) drive and wait 24 hours for a phone I paid $484 (I wasn't eligible for upgrade), and then had to drive back here (45 mins) for an appointment to replace the phone, then I would just return phone.
I didn't yell. I just expressed that it seemed to me it would be easier to try a phone in the back and see if it activated with my SIM. If it did, then it was the phone and not AT&T's servers or what not.

He said he'd go ask and try. So back to some iPad 2 browsing.

He came back and showed me a new phone that had activated. He then took my new SIM card and "Viola" it had activated with my SIM and all my contacts were there, thanks to iCloud.

I thanked him sincerely and bought a bright Orange bumper (I'm an OSU fan). He apologized again and I had a new phone.


BTW - I will probably never pre-order another product ever.
B

Well, they say misery loves company and I must say I'm GLAD to see that I was not the only person dealing with issues last night. It allowed me to partially activate and by that I mean, my phone was activated as far as AT&T is concerned but not totally on the phone. It was only connecting to one of the wireless devices in my house and when I opened the info (wireless address information) on both my new iPhone and ipad to compare, they both had different addresses. I started to change the incorrect address manually on the new iPhone but decided against it because I've NEVER had to do this before. Not a good night.
M

I am new so just wondering if it's possible to activate an iphone 4 on ios5 with an old deactivated microsim from att sadly i upgraded without knowing i would need the sim again. as i have been using gevey for about a year now. is it possible to just go and by my friends old deactivated sim and use it to activate my phone and then dowgrade the hone to 4.3.5? i have been researching and apparently gevey is unusable on ios5. Help??? im a n00b
K

I'm not trying to brag or anything but I just turned my iPhone 4S on, filled out all the information it asked for and I was done and activated! Verizon RULEZ
You must log in or register to reply here.

Activating iMessage and Facetime on an iPhone without activated Sim