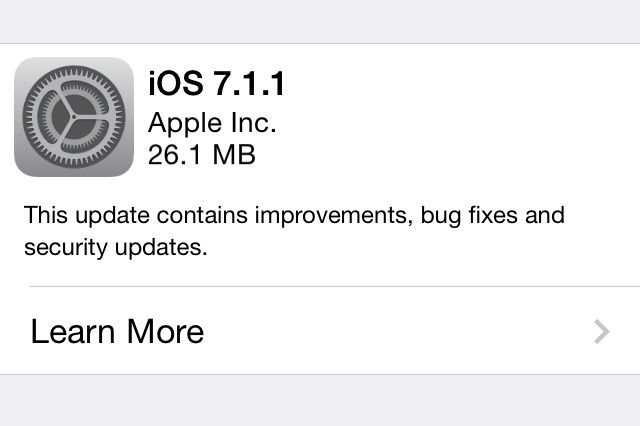 iOS 7.1.1 has been released for public download/update. For the iPhone 5S, users will have a more responsive experience with their keyboard, minor tweaking/improving of TouchID as well as Bluetooth Keyboard with VoiceOver enabled. Additionally, 7.1.1 also addresses the following security issues:

CFNetwork HTTPProtocol
Available for: iPhone 4 and later,
iPod touch (5th generation) and later, iPad 2 and later
Impact: An attacker in a privileged network position can obtain web
site credentials
Description: Set-Cookie HTTP headers would be processed even if the
connection closed before the header line was complete. An attacker
could strip security settings from the cookie by forcing the
connection to close before the security settings were sent, and then
obtain the value of the unprotected cookie. This issue was addressed
by ignoring incomplete HTTP header lines.

IOKit Kernel
Available for: iPhone 4 and later,
iPod touch (5th generation) and later, iPad 2 and later
Impact: A local user can read kernel pointers, which can be used to
bypass kernel address space layout randomization
Description: A set of kernel pointers stored in an IOKit object
could be retrieved from userland. This issue was addressed through
removing the pointers from the object.


Security - Secure Transport
Available for: iPhone 4 and later,
iPod touch (5th generation) and later, iPad 2 and later
Impact: An attacker with a privileged network position may capture
data or change the operations performed in sessions protected by SSL
Description: In a 'triple handshake' attack, it was possible for an
attacker to establish two connections which had the same encryption
keys and handshake, insert the attacker's data in one connection, and
renegotiate so that the connections may be forwarded to each other.
To prevent attacks based on this scenario, Secure Transport was
changed so that, by default, a renegotiation must present the same
server certificate as was presented in the original connection.

In short, Apple continues on the road to resolving their previous SSL issue (which was patched in 7.0.6 but remnant vulnerabilities still exists) and boosting security over protected and unprotected networks, continues to go down the road of WebKit tweaking, which is somewhat supplementary to a bug in the language pack where a specific string of Arabic characters when scrolled or loaded on your browser or app, will cause your device to crash. The kernel fix patches the KASLR exploit/vulnerability, one of the remaining Evasi0n7 exploits that was not patched on 7.1.
Last edited: Apr 22, 2014

Updating now.. though mine says 18.2MB. Thank you, willerz!
OP

Size always varies depending on device when it comes to updates. But the supposed update size was anywhere from 12MB to 30MB or so for this delta fix.

Updated my iPhone5 about 30mins ago.
You must log in or register to reply here.