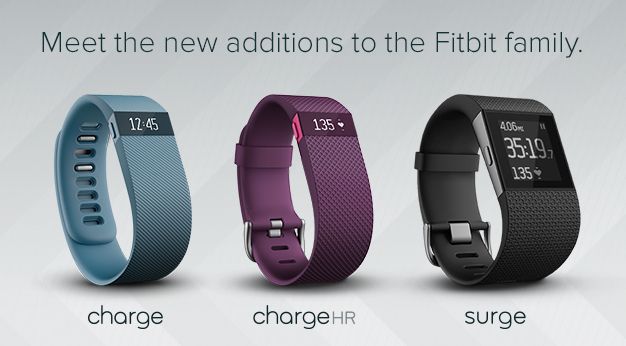 Back in February, FitBit had a bit of an embarrassing time, after having to recall its Force wristband, due to a myriad of folks complaining about rashes. It looks like on Monday FitBit is ready to get back into the game, announcing a new family of activity trackers; Charge, Charge HR, and Surge.

The FitBit Charge includes a battery, which is said to last up to seven days, a revamped design, as well as a plethora of fitness sensors. The Charge can measure calories burned, floors climbed, distance traveled, and steps taken throughout the day. The wristband has a small OLED screen, which can also show Caller ID and is prices at $130.

FitBit's Charge HR is an improvement from the aforementioned Charge device. The HR includes all of the previous feature alongside FitBit's PurePulse sensor, which track the users hearth rate 24/7. The Charge HR seems to be a bit pricey for just the addition of a heart rate monitor at $250, launching in early-2015.

Finally, the FitBit Surge is probably the best bet for your buck. The Surge has a built-in GPS, which measure distance traveled without being connected to a smartphone. Along with GPS, the monitor has 7 other sensors a tri-axis accelerometer, gyroscope, compass, ambient light sensor, and heart rate. Surge can also track the users sleep, along with displaying text messages, calls, controlling music and more. Due in early-2015, the FitBit Surge will be priced at $249.

As you may know, early-2015 is also the time-frame Apple gave for the release of the Apple Watch. The Apple Watch will be starting at $349, which makes it a bit more expensive as well as only have about a single day's worth of battery life. Folks looking for something less-expensive and more fitness focused should consider FitBit's new devices.
You must log in or register to reply here.