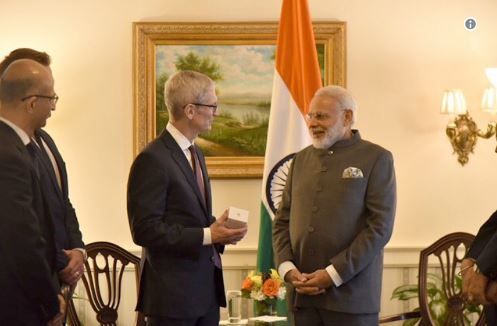 9to5 Mac reports that the first iPhone SE models to be manufactured in India have arrived in retail stores in several cities in that country following Apple’s confirmation yesterday that production had started on the phones. Unfortunately, though, the fact that the phones were being manufactured locally has not resulted in a reduction of the retail price of the phone, much to the disappointment of those who had thought this would happen, including the Indian government.

One of the main reasons behind Apple’s decision to manufacture the iPhone SE in India was in order to be permitted to open Apple retail stores in the country, as India requires that companies manufacture at least 30% of the products they want to sell in India if they want to open a single-brand store. Presently you can only buy Apple products in third-party authorised reseller retail stores in India.

It appears that Apple is currently not differentiating between iPhone SE models made locally in India and those made elsewhere, and pricing of the phones remains consistent regardless of the country of origin of the phone.

Meanwhile, Apple CEO Tim Cook has today tweeted about his meeting with Indian Prime Minister, Narendra Modi, saying “Great to see you again @narendramodi. We’re inspired by your vision for India and excited about what we can achieve together.”

Source: First ‘Assembled in India’ iPhones rolling out without any fanfare or price reductions as yet
You must log in or register to reply here.