Apple to Launch Accessibility Range in 2016 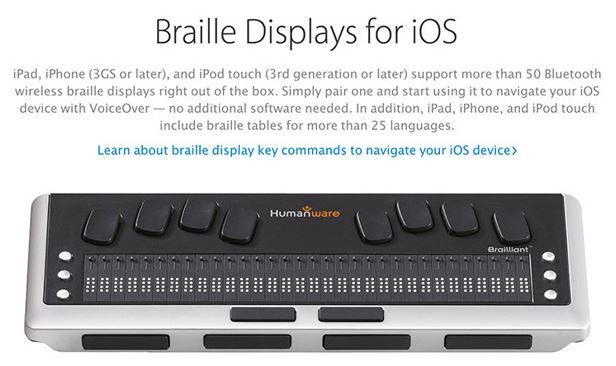 AppleInsider writes that according to Japanese website MacOtakara, Apple is planning to launch a range of accessibility devices designed to help users with disabilities, both online and in its retail stores sometime between January and March 2016.

And while it is not yet known what form this new range of products will take, Apple’s current range already supports a variety of accessibility hardware options, including special hearing aids for iPhone and Braille displays.

Accessibility options have always been a big part of Apple’s software and products, including Mac, iOS, watchOS, and the new tvOS. Features such as Guided Access, VoiceOver, dictation and various other adjustments can all be accessed via iOS devices, for example, and Apple made a point of publicising the fact that FaceTime was ideal for users of American Sign Language.

Apple was also recently awarded a Helen Keller Achievement Award by the American Foundation for the Blind for its work on VoiceOver tech.

We look forward to telling you more about this new range when Apple is ready to release more information about it!

Source: Apple Stores to feature accessibility products in early 2016, report says
You must log in or register to reply here.