I just wanted to let you know about my new app which just went live, called Wake Smarter.

Its a voice-controlled alarm clock for the iPhone, iPod Touch and iPad. You can use your voice to set alarms, ask for the news or weather, play music, listen to your Twitter & Facebook feeds and more. You can program your whole morning like a playlist, including messages from our celebrity guests, joke of the day, horoscope etc.

Im looking to get some feedback on the app and some ideas on how to get the word out about it. Any help you can provide would be really appreciated. 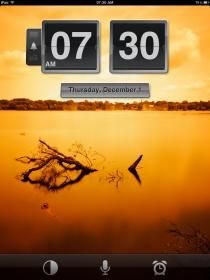 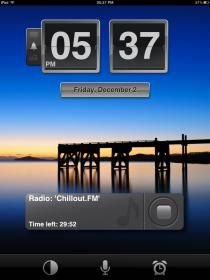 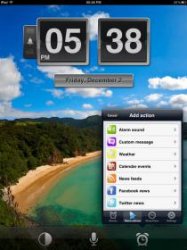 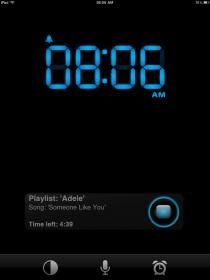 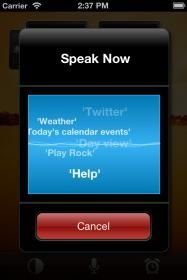 Thanks for the info on this Toni1.

this app sounds really cool !!! Have always been looking for something better to wake up to than the annoying sound my alarm clock makes..

The app works ok except for choosing weather to wake up to. It gives no option to choose weather location. I choose alarm at night to test and it tells me it's sunny at 10:00 at night and temp range of 30 to 55 degrees ??? Lol. Don't choose weather as an option. iTunes playlist works good though

I don't like how the snoze works though. You have to hold the screen for 2 seconds. I would rather be able to yell at it to snooze like you can say other things to it.

Thanks for your comments

I better get the weather service checked. The app is right now using your standard location and probably the weather reading is for that day and there is no night data separately. I bet in the morning it gives a good reading again. Adding a manual option is a good idea though, maybe you are travelling somewhere and want to know the weather there instead of your current location.

I wanted snooze to work exactly like you put it (by voice), just that for the voice recognition simultaneous input and output is technically very complicated (on a mobile device). I'd love to change that though

Make it free for people to test out and give you feedback.

Thanks Toni for responding.

I found a way around the playlist issue. I just created a new playlist in my itunes for the alarm app and chose songs I would want to wake up to and used those.. works perfectly.

yea, the weather thing is weird but no biggie, the news rss feeds work well and I would rather wake up to music anyway. I wish there were more american choices in the rss choices, appears to be alot of foreign choices.

I hope you can work out the snooze issue in a later release, waking up and having to touch the screen for 2 seconds is not ideal.

But still, overall, its a great concept and great app. I look forward to future releases.. thanks...
OP
T

Sure, it plays any playlist that you have created. Actually you can also ask for it to play a specific one by using voice command "play playlist <name>".

In the RSS feeds you can search either by "category" or by "source". If you go by "source", you'll get all US choices right away. The largest selection is for US, a bunch of other English speaking countries are also there with major newspapers and such. And of course you can copy/paste your own RSS feed into the app if you like.

Hey Toni1, just downloaded your app a few days ago and have to say its pretty cool. Only one complaint though. it should really have landscape mode. but other than that its impressive.

I wish you could add the current weather on the home screen.. that would be a great addition...
OP
T

Thanks landscape view is definitely on the list of considered updates. Putting weather info on the screen (day view) would be cool as well, need to see how it's design would fit with the background pictures
6

Good stuff. Give a shout out when you make these upgrades.
H

Any word on when the landscape mode is coming?
OP
T

Landscape mode is being considered for the next update so stay tuned.
You must log in or register to reply here.

H
Wake up in style now!!! Your Custom Alarm App with Photo and custom voice feature