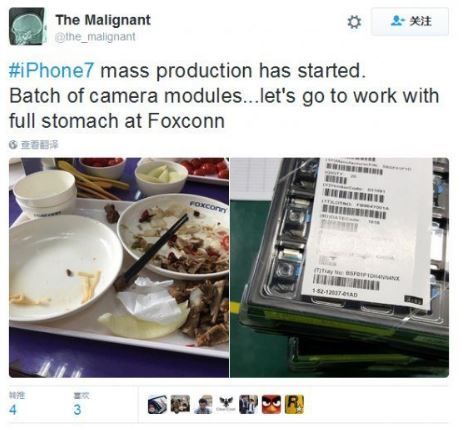 While Apple has yet to even confirm the existence of the forthcoming iPhone 7, it seems that many of the rumours about the next iPhone will prove to have been accurate when Apple finally announces it this fall. However, according to Tech Radar, one of the rumours has today been called into question by some leaked images that it is claimed are straight out of the Foxconn factory.

The images were leaked by Twitter user The Malignant, who tweeted the following,

“#iPhone7 mass production has started. Batch of camera modules…let’s go to work with full stomach at Foxconn.”
Click to expand...

Not only did The Malignant tweet a picture of the camera modules, he or she also tweeted an image of their lunch tray, complete with branded Foxconn bowl, to prove that they really were in the factory.

What the leaked image shows is that the camera modules are single-lens only, rather than the dual lens that was purported to be installed in the iPhone 7.

Assuming that the image is genuine, it may well be that the single-lens modules are intended for the standard iPhone, with the iPhone 7 Plus (and possibly iPhone 7 Pro) versions getting the dual-lens camera, which is also something that has been rumoured previously.

Source: The iPhone 7 may not have a dual-lens camera after all | TechRadar
You must log in or register to reply here.