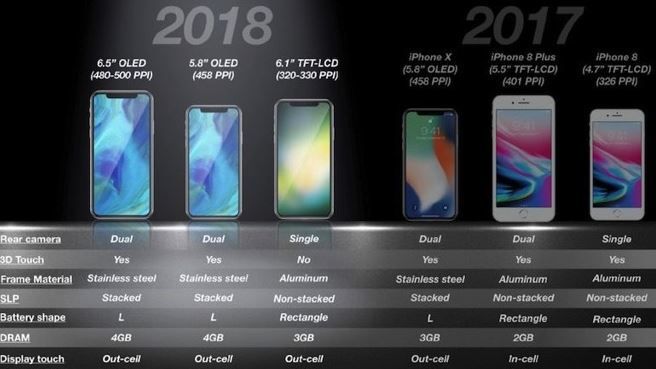 AppleInsider reports today that a new rumour has surfaced via DigiTimes Research Division’s sources in Apple’s Chinese supply chain that Apple is mulling over plans to release two LCD iPhones and two OLED iPhones this year. The two LCD models would be 5.7- and 6-inches, and the two OLED (or “X”) models would be 6- and 6.4-inches. The same source also says that whatever Apple decides to do, all phones in the range will support wireless charging and have “3D sensing functionalities.” It’s not clear if the latter is referring to a TrueDepth camera system, 3D Touch, or something different.

AppleInsider cautions that DigiTimes usually has accurate information about individual component sources, but tends to be less accurate when it comes to Apple’s own future plans.

This latest rumour also contradicts what the usually well-sourced KGI Securities analyst Ming-Chi Kuo has said about this year’s main iPhone line-up, i.e., that Apple would be releasing two OLED iPhones and just one LCD iPhone.