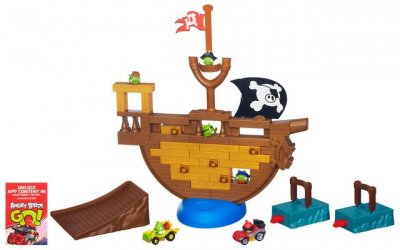 ​
Back in June, Angry Birds developer Rovio teased us with a new game joining the Angry Birds series titled Angry Bird Go! Later, the company release a live-action trailer for the game, which showed off kart-racing and a sponsorship from Red Bull. Since then it has been pretty quiet on what the game is really about, but today the folks at Kotaku have located images of an upcoming Angry Birds Go! toy line.

As seen in the image above, the game looks not only to be a kart racer, but to have some old Angry Bird mechanics put in play. According to the blog, Rovio has teamed up with Jenga to create things such as pirate ships with the blocks for the birds or pigs to knock down. While there isn't too much information on this new game yet, let your imaginations run wild. The game could possibly be a kart racer with obstacles in the road which users could knock down and get a speed boost, depending on the players accuracy, just my two cents. We'll of course keep you posted on any information about the upcoming Angry Birds game.

Source: Extensive 'Angry Birds Go!' Toy Line Revealed, Possibly Hints at What Gameplay Will Be Like | Touch Arcade
You must log in or register to reply here.

Are the Bad Piggies About to Turn the Tables on the Angry Birds?

It's Going to Be An Angry Birds Christmas!