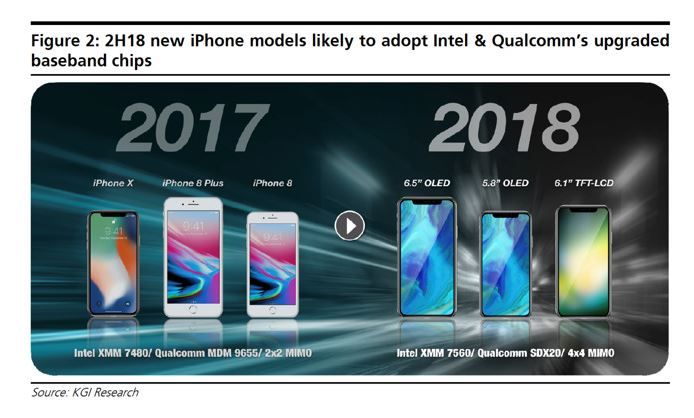 According to a new note to investors from KGI Securities analyst Ming-Chi Kuo, via AppleInsider, Apple is planning to upgrade the baseband chips in the 2018 iPhone range to enable the phones to have “significantly” faster LTE transmission speeds.

Kuo says that the 2018 iPhone line-up will use Intel’s XMM 7560 chips and Qualcomm’s SDX20 chips. Apparently Intel is the company that will get the bulk of Apple’s orders, with Kuo saying that Intel will be responsible for between 70 to 80% of total baseband orders. Given Apple’s current litigation problems with Qualcomm, it’s no surprise that Apple wants to take the bulk of its custom elsewhere.

The current iPhone line-up supports LTE plus 3G connections, but according to Kuo, next year’s line-up will support LTE plus LTE connections.

Kuo also thinks that Apple intends to become a significant player in baseband chip design, and if it succeeds in this aim, that could even have a knock-on effect on iPhone pricing.

“The entry barriers for baseband chip design are much higher than for application processors, but if Apple can successfully dominate the design of baseband chips, production costs will decline and the iPhone will become much more competitive in the market.”
Click to expand...

Source: KGI: Next Year's iPhone Models to Have Upgraded Intel and Qualcomm Modems Enabling Faster LTE Speeds
You must log in or register to reply here.

KGI: Next Year’s iPhone Line-Up Will Have Upgraded Antennas for Faster LTE