Kawasaki Robot Can Fit Your iPhone Screen Protector Without Any Bubbles 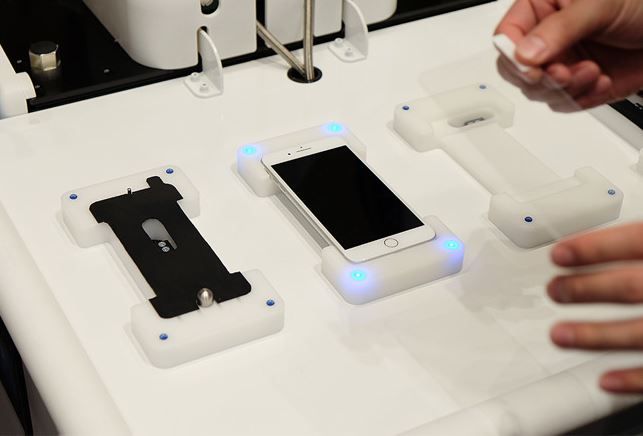 AppleInsider reports that Kawasaki has been showcasing a new industrial robot called “duAro,” which appears to have discovered the secret of how to apply a screen protector to your iPhone without leaving any trapped air bubbles underneath.

In a demonstration of its skills at Pepper World in Tokyo, Japan, this week, the duAro was shown peeling the film off the protectors and then applying them very neatly without a trace of bubbling.

The duAro has two arms that work in tandem and that need very little space to operate in. The duAro works in conjunction with Aldebaran and SoftBank’s humanoid robot called the Pepper, which is able to accept tasks and pass them on to the duAro unit.

The Pepper robot can react to a person’s emotions and expressions.

It’s possible that the duAro, or a similar machine, could be used by Apple to apply screen protectors in Apple retail stores. Apple does already have some machines provided by Belkin that are used for this purpose, but the duAro robots might well be even better than the current method, possibly even enabling customers to operate the robot themselves.

Source: Screen protector bubbles on your iPhone could be a thing of the past with Kawasaki's new robot

This looks like a nice addition to the services available at Apple stores, hope they bring some in for testing
You must log in or register to reply here.