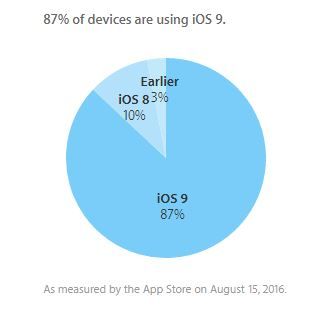 iDownload Blog reports that according to Apple’s latest figures, the iOS 9 adoption rate has now reached 87% of iPhone, iPad, and iPod touch devices, representing a 1-point gain from a month ago. In this same period, iOS 8 fell from 11% to 10% of devices, possibly signifying that upgrades could be responsible for a large percentage of the iOS 9 growth. Older versions of iOS make up around 3% of devices.

The figures were recorded by Apple’s logs, which captured devices that accessed the App Store on August 15, 2016.

Aside from the fragmentation issue, another reason why so many Android users are still running 2-year-old (and older) software is the slow rollout of upgrades by carriers and vendors.

Source: With few weeks until iOS 10’s fall release, iOS 9 adoption hits 87 percent of devices
You must log in or register to reply here.