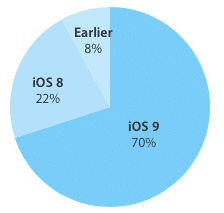 Apple’s dashboard for app developers was updated with fresh new statistics pertaining to the rate of iOS 9 adoption. According to logs of iOS devices that have accessed the App Store on November 30, 2015, the various iOS 9 versions are now found on seven out of each ten devices.

According to Google’s own data, Android Marshmallow is accounting for just 0.3 percent of Android smartphones and tablets.

Recently, iOS 9.1 launched with more than 150 new emoji characters and Live Photos enhancements for iPhone 6s and 6s Plus owners, driving adoption rates up another 9 percent as recorded in early November.