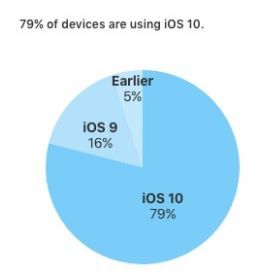 Judging by these figures, the iOS 10 adoption rate seems to be a little ahead of the iOS 9 adoption rate over the same length of time, with iOS 9 sticking at 77% of active devices for a short time back in February 2016.

The already impressive iOS 10 adoption rate is set to increase even further very soon with the release of iOS 10.3, which is currently still in beta. The update’s key new features include “Find My AirPods” and also the new Apple File System (APFS).

iOS 10 adoption rates are way ahead of those of Android, of course, with Android’s latest OS, Nougat, currently installed by just 1.2% of active Android devices.

Source: iOS 10 Now Installed on Nearly 80% of Active iOS Devices
You must log in or register to reply here.