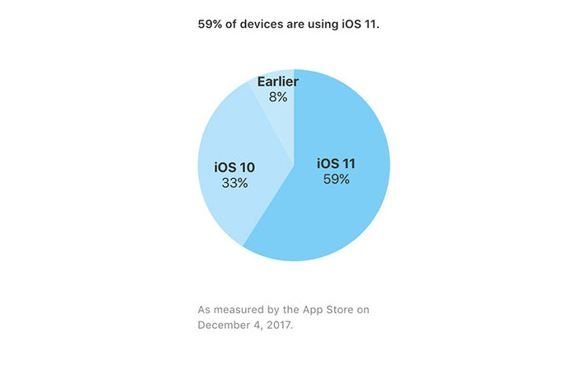 Apple’s figures also show that 33% of supported devices are still using iOS 10, and 8% are using various older versions of iOS.

Interestingly, even at 59%, iOS 11 still lags behind the adoption rate of iOS 10, which had reached 63% within the same time frame.

One reason for a slightly lower adoption rate for iOS 11 could be the various bugs that have been widely reported on, and which Apple has had to issue a number of fixes for, including extreme battery drainage issues.

Source: Apple's iOS 11 installed on 59% of compatible devices, up 7% from November

17% of my supported devices are still running iOS 10, I'm doing my part

Location
New Zealand, where all the iPhones are unlocked

I guess I am just a statistic
You must log in or register to reply here.