FCC could let airplane passengers use cellular service in mid-flight 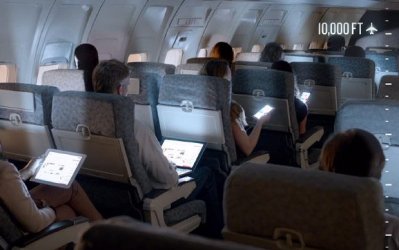 ​
When you have a long flight to make, if you cant sleep, you either grab a book with you or you play on your smartphone/tablet. According to The Wall Street Journal, you soon could be allowed to use the cellular service during the flight. The U.S. Federal Communications Commission is looking at a proposal that would allow passengers to use cell phones on airplanes during flight, letting them make voice calls and use cellular data when above 10,000 feet.

Ryan Knutson with the WSJ says the following:

That would remove a regulatory hurdle to in-flight calls, but it would be up to the airlines themselves whether to allow them. Airlines have said they would approach the matter cautiously because of strong objections from their customers. The carriers also would have to install equipment on their planes to communicate with cellphone towers on the ground.

The Federal Aviation Administration said last month that it would allow expanded use of electronic devices during flights. Technical concerns about the airborne use of gadgets have faded. But the debate about the social merits of allowing people to make phone calls with a captive audience in the close confines of an airplane cabin promises to be vigorous. At least one FCC commissioner's office was flooded Thursday by negative reaction to the proposal, an aide said.
Click to expand...

The Federal Aviation Administration has recently relaxed the rules on the use of electronic devices in flight when it decided to allow gate to gate use of devices like iPads.

how sweet would that be.... also how bad would the data charges be in mid air, even if you have unlimited?

I'm sure glad I don't have reason to fly. I can't imagine what it will be like having everyone trying to talk over the people around them - especially those who think they have to be on speaker all the time. And if you're not one of those using a phone, how disturbing it will be. I just can't see any good coming of this. People just don't seem to have respect for each other anymore.

It won't be welcomed over in the US. I haven't talked to anyone yet that wants voice calls allowed on planes. I certainly don't want to listed to private conversations all around me. Now if data usage is available...that would be awesome!

Please NOOOOO.... I will get the one that will yak for the whole flight just because they CAN!!!! :O

Sent from my WiFi Only Black 64GB iPad with Retina Display using iPF.net
You must log in or register to reply here.

The next gen iPhone might sport a preferred communication feature

Move for Federal Law to Ban Cell Phone Use While Driving in the U.S.