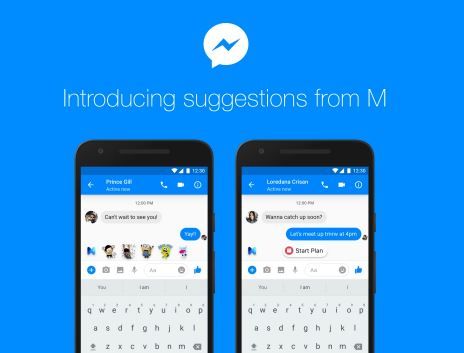 Facebook has announced the launch of its new virtual assistant for Messenger, which it has called

“M,” which it says is designed to “make your Messenger experience more useful, seamless and delightful.”

Currently only available in the US, but soon to roll out worldwide, M is powered by artificial intelligence, and will “pop” into your conversation to suggest relevant content.

According to Facebook, when M was first announced more than a year ago, “it was a small AI experiment powered by humans that could fulfill almost any request.”

Facebook adds that it learned a great deal from this experiment, with that knowledge then leading to the creation of the “completely automated” version of M that has just been launched today.

Facebook has been testing the feature with a small number of users over the past few months, and proclaims it “a great success.”

Source: M Now Offers Suggestions to Make Your Messenger Experience More Useful, Seamless and Delightful | Facebook Newsroom
You must log in or register to reply here.