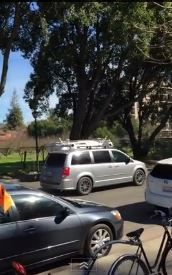 Following on from rumours that surfaced over the weekend via Reuters that Apple is researching the development of a self-driving electric car, MacRumors has obtained footage of one of the mysterious Apple vans that have been spotted driving around the streets of the U.S. in the past few weeks.


The footage was provided by MacRumors reader Jonathan Shiu, and shows one of the vans driving past Juana Briones Park on Clemo Avenue, which is apparently around 10 miles from Apple’s Cupertino headquarters.

The jury is still out as to whether or not these fifth-generation Dodge Caravans are involved in Apple’s research into a self-driving car, or if in fact they are simply for some sort of mapping project, possibly an Apple Maps version of Google’s Street View, which has also been rumoured.

Either way, it is very early days for any sort of project involving self-driving car technology for Apple, but it's nice to get a look at these mysterious vans driving around!

Source: Mysterious Apple Van Captured on Video in Palo Alto Residential Neighborhood - Mac Rumors
You must log in or register to reply here.