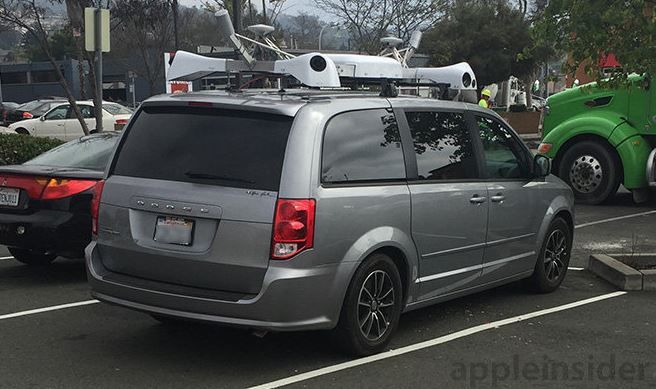 AppleInsider has posted new high-res photographs of one of the mysterious vans that are thought to be part of some sort of secret project.

The photos were taken by AppleInsider reader Jason, who saw the vehicle in a parking lot in Richmond, California, which is in the middle of the San Francisco Bay Area, and not that far from Apple’s Cupertino headquarters.

As with the other vehicles that have been seen, the one photographed is a Dodge Caravan with California plates. The photos show that the equipment on the van’s roof appears to include GPS and camera equipment. An earlier report said that this includes at least six cameras, dual LiDAR sensors, two GPS antennae, and a wheel encoder, according to AppleInsider.

And while it might be easy to tie this in with the recent rumours that Apple is working on a self-driving electric car, it is more likely that the vans are carrying out some sort of mapping project, possibly bringing a version of Street View to Apple Maps.

If you are engineering a car then the need for GPS and cameras on the roof is zero. It is a mapping vehicle.

Gee, driver of this oddly equipped Caravan, watch out for low clearances such as many underground parking lots, banks and fast food drive thrus.....otherwise the expensive loking roof attachments to be ripped clean off the van in a blink..... I suggest 12" low profile Chicano style rims and tires...tiny wheels with chrome and white walls.......and maybe when the van needs to be replaced, pony up some more cash and instead of a mom-avan like Dodge, let's get a big Mercedes SUV tank.....Apple can afford...lol
You must log in or register to reply here.