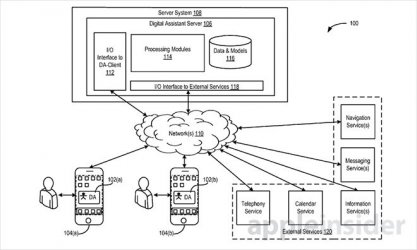 The U.S. Patent and Trademark Office has published on Thursday a patent filing published by Apple which suggest that the company is looking into the possibility of crowdsourcing answers for Siri. The patent is titled "Crowd sourcing information to fulfill user requests," and details how Siri can request, gather and store data from a number of crowd sourcing information services.

Discovered by AppleInsider, the external sources of information for Siri can include compiled data from experts, and other general information sources found on the Web or even question-and-answer forums. There are plenty of questions that Siri cant answer, be it because they are too difficult, nuanced or just uncommon. To fetch answers, Siri relies on data that it pulls from the Web and other online services, like Yahoo!, WolframAlpha and Bing. But if applied, this patent would expand even more Siris sources for information. Mikey Campbell further explains:

As explained by the document, the digital assistant requires a natural language processing system, knowledge base and artificial intelligence to function satisfactorily. Any of these facets can hinder operation and, in some cases, produce unsatisfactory answers. It is in these scenarios that a CS information service can be deployed. For example, the CS module can be invoked as part of response failure mechanism that can be updated over a period of time to remedy a speech recognition problem. More commonly, the CS module can query a CS knowledge base to address questions previously unanswerable in real time. According to the patent language, the external sources of information can include services that compile data from experts, general information sources found on the Web and various question-and-answer forums.
Click to expand...

Each iteration of the virtual assistant has come with important improvements, but a direct human element in providing answers was missing. Apple could change it in a future version of Siri. Apple's crowd sourcing patent application was first filed for in March and credits Thomas R. Gruber, Adam J. Cheyer and Donald W. Pitschel as its inventors.


Source: AppleInsider
You must log in or register to reply here.

Siris Comprehension and Accuracy Put to the Test

Siris search system, will pose a threat to Google in the future?

Siri Turning to Google Less and Less for Information