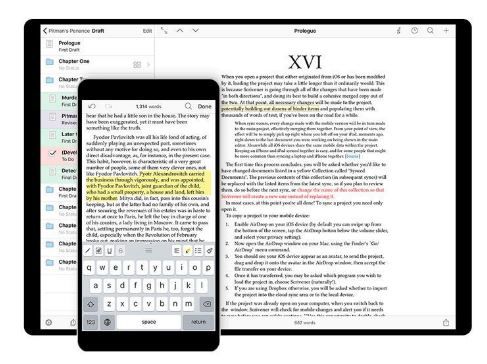 Mashable reports that the popular writing app Scrivener has finally arrived on iOS. Scrivener first appeared on Mac in 2007, and won praise from fiction and non-fiction writers alike for the way in which it enabled them to do many different tasks, including organizing chapters, research material, and word processing, all within the same program. Since then, there have been many calls for an iOS version of Scrivener, but it never seemed to happen, until now, that is.

One of Scrivener’s rivals, Ulysses, released its own iPad version last year, stealing a march on Scrivener and attracting many users who had grown tired of waiting for Scrivener on iOS.

Now those who remained loyal to Scrivener have been rewarded with the release of the iOS app, which Mashable is very impressed with, stating that it is “a near-perfect mirror of the desktop version.”

Possibly in a bid to win back those users who had defected to Ulysses, the Scrivener app costs $19.99, while Ulysses costs slightly more ($24.99). The Scrivener app also has the upper hand in terms of being available for both iPhone and iPad. Features of the Scrivener iOS app include pinch to zoom and shrink documents, importing of research documents and media files, and also many of the options such as Word, Final Draft, Plain Text and PDF, which are already available in the desktop version.

One important thing that it lacks, however, is iCloud compatibility, so you’ll have to use Dropbox to sync documents. This is one area where Ulysses still has the upper hand.

Here’s what the makers of the app, Literature and Latte, had to say about the long wait for an iOS version:

“A big thank you to all the Scrivener users who cheered us on and sent us words of encouragement during the tortured development cycle of our iOS version,” adding that they got through coders “like Spinal Tap gets through drummers.”
Click to expand...