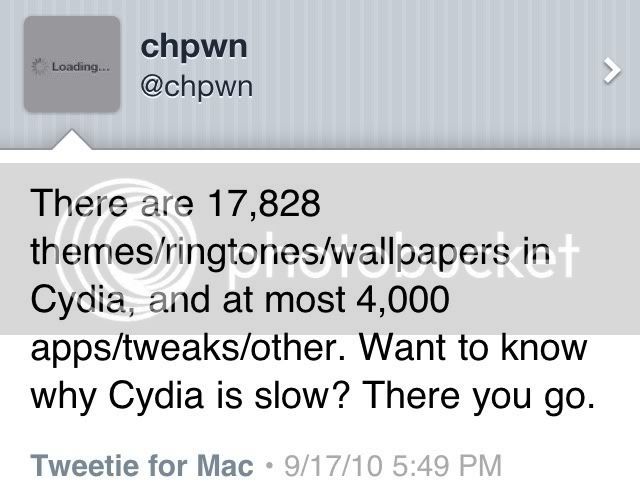 chpwn, developer of Cydia downloads like ProSwitcher, Infiniboard, and Infinifolders, recently tweeted on how many things there are in Cydia to download. Upon the App Store, that has well over 200,000 apps to download, you have Cydia. Now Cydia is the App Store for the Jailbreaking world as some call it, but mostly it contains tweaks and themes for tweaks to make your phone better.

Cydia was developed and released for the now iOS platform back in March 2008, a little over two years later look at what it has become. Although not as impressive as the App Store, remind you that Cydia was created by a third party developer all part of something called Jailbreaking, also third party. With scares from Apple about losing your warranty, updating your baseband or firmware, Cydia is pretty big for those developers that decided to spend time on something not used by the whole community. 17,000 themes, wallpapers, ringtones and 4,000 tweaks and other stuff later, here we are.

i would switch to rock if i jailbroke again because of the you to pay
You must log in or register to reply here.

BUILD YOUR OWN LOCKSCREEN Theme For iPhone And iPod Touch

How To Get VIDEO RINGTONES For iPhone With 'VUZIQ' Cydia Tweak