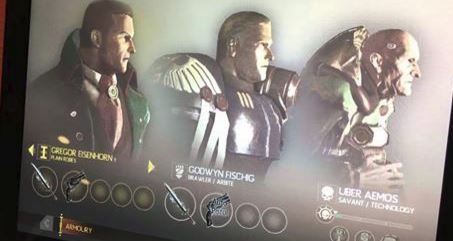 Touch Arcade reports that Pixel Hero Games have announced that Eisenhorn: Xenos, the iOS game set in the Warhammer universe, will finally be released on August 10, simultaneously with the PC version.

The 3D action adventure game is based on Dan Abnett’s Xenos, which is the first book in the Eisenhorn Trilogy.

The storyline follows the journey of Gregor Eisenhorn, inquisitor of the Ordo Xenos, Alien hunters of the Imperium, on his quest to hunt down an ancient evil tome. Players get to experience the game through Eisenhorn’s eyes, using stealth, psychic powers, and lots and lots of weapons, in the 11-hour single-player campaign.

“We are tremendously excited to be working with Games Workshop on such a unique project,” said Pixel Hero Games Studio Head Nader Alikhani. “Adapting the incredibly rich source material of ‘Xenos’ into a compelling adventure game, and allowing players to experience the inner workings of the Imperium of man through Eisenhorn’s fabled eyes is an opportunity I’m sure no fan will want to miss.”

“The Pixel Hero Games team is a talented outfit, and matching their skill with the story and characters of this much loved and best-selling book will create a unique and characterful experience,” said Games Workshops Head of Licensing, Jon Gillard. “They’ve captured the look and feel of the Xenos novel wonderfully, and this distinctive take will allow players to interact with the Warhammer 40,000 universe in ways not seen before.”
Click to expand...

No word on pricing for the iOS version as yet.

See The Youthful Marvel Avengers Posing for Their Yearbook photos in New Trailer!