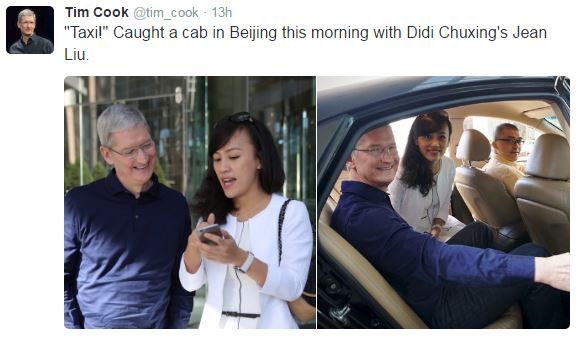 Tim Cook has been having a busy time during his trip to China, with MacRumors reporting that the Apple CEO spent his first day in the country taking a ride to a Beijing Apple store in a cab provided by Didi Chuxing, an Uber rival that Apple has just invested $1 billion in.

Cook shared his journey with Didi Chuxing president Jean Liu, who then hosted a seminar at the Beijing Apple store. Cook attended Liu’s seminar, as did founders and CEOs of some of China’s biggest app producers, giving Cook the opportunity to also network with the app developers.

Cook has been posting photos of his trip on Twitter and Chinese networking platform Weibo. It’s no surprise that Cook is making such a high-profile trip, as greater China is Apple’s second biggest market as far as revenue is concerned, and saw sales drop there by 26% in the second quarter.