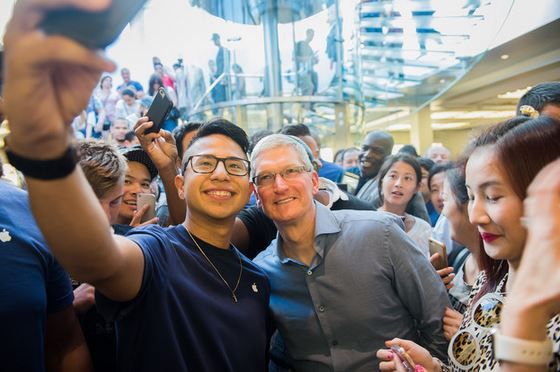 MacRumors reports that Apple CEO Tim Cook has given a wide-ranging and fascinating interview with BuzzFeed while being driven to Apple’s flagship 5th Avenue store in Manhattan during his current round of surprise Apple store visits.

Talking about the privacy debate surrounding “Hey Siri,” Cook told BuzzFeed that the feature can be turned off for anyone who had such worries. He also said that the information stays on the iPhone and doesn’t go anywhere else.

As far as favourite features of the forthcoming iPhone 6s and iPhone 6s Plus are concerned, Cook seems to be particularly fond of 3D Touch, saying, “I personally think 3D Touch is a game changer. I find that my efficiency is way up with 3D Touch, because I can go through so many emails so quickly. It really does cut out a number of navigational steps to get where you’re going.”

Turning to the iPad, Cook went as far as to say that he believes that some people may “never” buy a traditional desktop or laptop, and instead will only use iPads.

And finally, Cook addressed the thorny matter of those apps such as Stock that simply can’t be deleted from your iPhone and iPad, however hard you try. Cook told BuzzFeed that while Cook is aware that many users want to delete the apps from their devices, the solution is not exactly as easy as you’d think. “There are some apps that are linked to something else on the iPhone. If they were to be removed they might cause issues elsewhere on the phone.” Cook added that despite these difficulties, Apple was definitely looking into the issue.

Tim Cook Talks About His First Year as Apple CEO