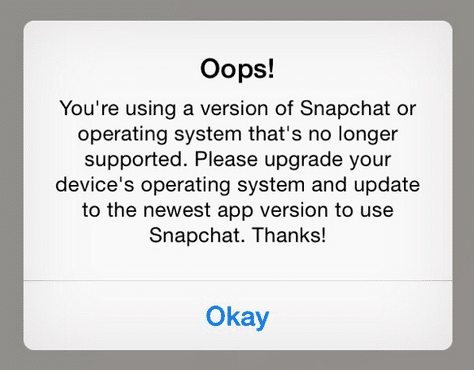 Similar to Apple, popular photo and video messaging app Snapchat is now cracking down on folks using Jailbroken devices. Earlier this month the Venice, CA company was locking users out who were using Jailbreak tweaks to alter the way Snapchat works.

The latest update to Snapchat adds a new message to anyone using Jailbreak tweaks on Snapchat. The message suggests that the user is on an operating system of version of Snapchat that is no longer supported.

Snapchat Jailbreak tweaks like Phantom add a bunch of features that we wish we had on Snapchat. One reason to use Phantom is the ability to send photos from your Camera Roll, another to replay snaps unlimited times. Phantom also recently added geolocation spoofing, allowing the user to use filters from different locations around the globe.

From this point forward, users will need to keep operating systems and Snapchat up to date, or else they will be unable to use the service. Hopefully the good folks developing these Snapchat tweaks will find some sort of workaround.

Do you think this is a little excessive?

It's their app. They can do it anyway they want. No one's arm is being twisted to use it. I've never used Snapchat. I'm happy with iMessage.
Last edited: Aug 16, 2015
You must log in or register to reply here.