Skype for iOS Gets Big Redesign 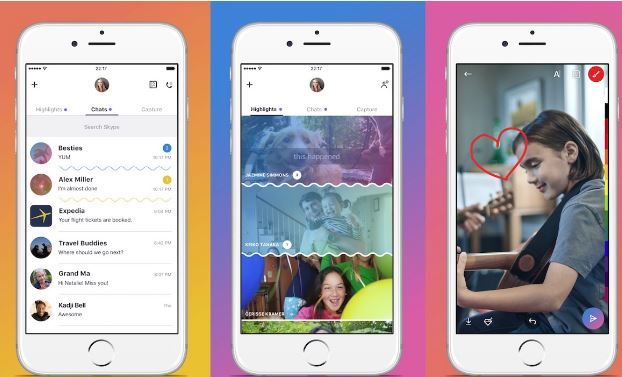 MacRumors reports that Microsoft has just launched a big redesign for Skype for iOS, with new chat, chatbots, and camera features. The app has also had a refresh of its overall look, and Microsoft says that it has given more choice to the user as to how the app will look when they use it.

The first change you’ll notice is that there’s now a Chat window as soon as you launch the app, from where you can then swipe to Camera and the new Highlights feature, which is Skype’s version of Snapchat’s Stories. In Highlights, you can take a picture or film a video, add emojis and/or text, and then post it as a Highlight. The advantage over Snapchat’s Stories is that Skype Highlights are available for a week, not just 24 hours. Only your followers can see your Highlights, but you can send individuals or groups Highlights before they are posted.

Skype has also added various interactions to chats and Highlights such as as being able to send emojis in reaction to messages, pictures, and videos instead of texting a response.

Microsoft’s Cortana has also been added to Skype via the new update, offering text shortcuts and suggesting quick answers.

Skype’s iOS update will be rolling out in approximately one month, with the Android update launching today.

Now You Can Send Money Via iOS Skype App