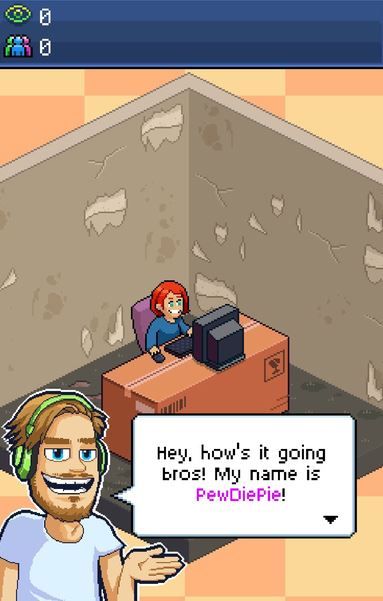 Superstar YouTuber PewDiePie’s new iOS game, Tuber Simulator, has soared to the top of the App Store charts in 29 countries in just a couple of days, reports VentureBeat. In fact the game was so in demand that it actually crashed the App Store, Pokémon Go style, for a while. If you’re not familiar with PewDiePie, he’s actually one of the most famous YouTubers in the world, with more than 48 million subscribers to his YouTube channel, so it’s no surprise at all that his second ever iOS game is such a huge hit. It also helps that its actually really good (and it features a cute pug minigame)!

The game was developed by Outerminds (who also made PewDiePie’s first number 1 iOS game, Legend of the Brofist) and published by PewDiePie’s own company, Revelmode.

Gameplay revolves around trying to become a successful YouTuber, just like PewDiePie himself (real name Felix Kjellberg), by making the best videos you can and buying upgrades to make them even better. You can also spend your money in-app to help you progress as a YouTuber, which has helped the game to become one of the top 100 highest-grossing iPhone games in the US.

Here are some of PewDiePie’s Tuber Simulator’s key features:

PewDiePie Legend of the Brofist Game Coming to iOS

RC Plane 2 Lands at the Top of the App Charts

Apple, iPhone 4 and iOS Gaming Scoop Up a Bunch of Guinness World Records