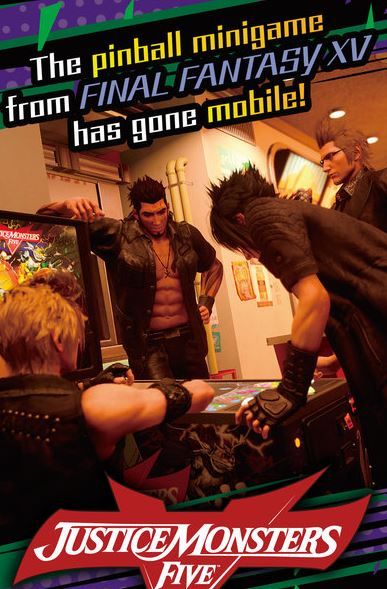 Square Enix has today released a free-to-play iOS minigame that features the pinball game that is playable at the Crow’s Nest Diner in the forthcoming Xbox One and PlayStation 4 game Final Fantasy XV, due for worldwide release on November 29.

Justice Monsters Five is a massively popular minigame among the residents of the Kingdom of Lucis in the world of Final Fantasy XV, including Noctis. Doubtless Square Enix is banking on the fact that Final Fantasy fans will love playing the minigame so much that they’ll also want to download the mobile version. And with Final Fantasy XV’s release date being pushed back a couple of months, it’s a great way of letting fans learn a little more about the main game prior to release, and, even better, it looks like you’ll be able to transfer your progress from the mobile game to the console game once it’s available.

The futuristic style of pinball featured in the game combines role-playing elements with some of Final Fantasy’s most iconic creatures and characters. The Justice Monsters Five of the title are Bomb Bro, Casanova Coeurl, Fab Flan, Grim Gargoyle, and Lamiana, who have teamed up to save the planet Nova from the evil Lord Vexxos.

The touch-and-flick controls are very simple to use as you fight in battles, recruit and train new monsters, and unleash special attacks to help you to emerge victorious in your fight for justice.

As a way of celebrating the launch, Square Enix is rewarding players with special in-game items, including 150 Golden Orbs and Daily login rewards of five Golden Orbs per day, from now until September 25.

I never play games, but as kid l loved the flipper machines even when my children were born.
This is a game for ME AT LAST YIPPEE DO