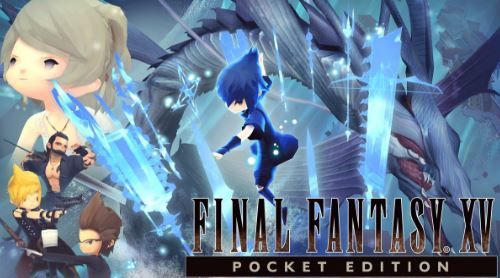 Square Enix announced that Final Fantasy XV Pocket Edition has arrived in the App Store today. All 10 episodes are available immediately, and the first one is free to download, with the remaining 9 episodes available to purchase either individually or as a bundle.

Designed specifically for mobile devices, the game tells the story of Crown Prince Noctis and his friends Prompto, Ignis, and Gladiolus, who embark on the ultimate road trip. The journey begins with Noctis set to marry Lady Lunafreya of Tenebrae as a symbol of peace between the nations of Lucis and Niflheim.

In a special feature article in the App Store today, Apple explains how the mobile version of Final Fantasy XV was developed alongside the console game, preserving the storytelling and themes of the original, but adding mobile-specific controls and reworked character designs.

Here’s what Final Fantasy XV director Hajime Tabata told Apple about why he wanted to make a Pocket Edition of the game: “The biggest reason is because iPhone is the hardware that I use the most throughout the day, and it’s also the most common device for us.”

Tabata explained that one major change in the gameplay from console to mobile was automating the battles. “The game is about travelling with your close friends, and that remains unchanged. In Final Fantasy XV, each battle becomes a memory of your journey. As long as we can accomplish that within the game, we thought automating the battles would not be a problem.”

Impressive but lazy. They do not have lips move at all. What a lazy. It is great for people who dont have the consoles at home. I do so I will pass. No thanks for the mobile version, thought.
You must log in or register to reply here.