I do a lot of driving and keep my phone in a car cradle, I have an Android phone currently. The OK google deal works but not super well. Thinking of going iphone next upgrade but am curious - Can you say to Siri

"Set calender/app", pick a day, time and title and have it automatically add that appointment to your calender?
"Remind me" etc? and have it enter it in the reminders?
"Call etc" and have it pick from your contacts and call?

Does it really do these well?

wow 38 views and no one knows if Siri can do these things and do them well? Anyone have an iphone here and have used Siri?

1). Siri can be used to make calendar entries. If your iPhone is plugged in, you can do this hands free by using "Hey Siri" to activate Siri.

2). You can ask Siri to remind you about something at a future time of your choosing. You can activate Siri manually or hands free as described above. Reminders can also be location based, such as; Siri remind me to buy flowers when I leave work. This way you get the reminder, not at a fixed time, but whenever certain conditions are met. In this case the condition is you leaving your work location.

3). When iOS 8.3 is released to the public you will be able to use Siri to initiate speakerphone calls to any of your contacts or to any specified phone number. To do so your phone has to be connected to a power supply and you activate Siri by speaking the phrase "Hey Siri".

At the current time, Siri can be used to initiate calls as described but you have to manually turn on the speakerphone.
Last edited: Apr 2, 2015

Siri can do a ton of cool stuff: 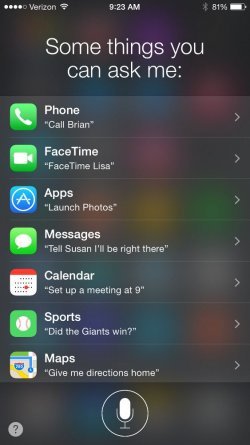 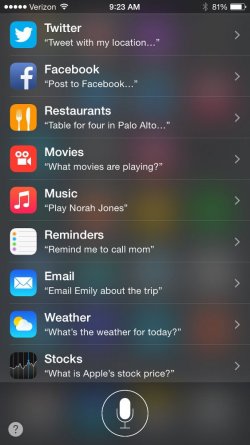 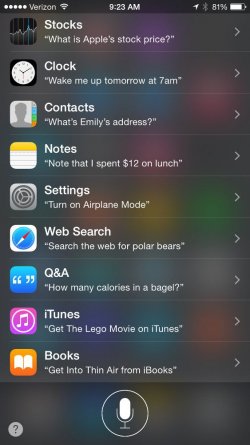 I remember getting lost once and asked Siri "how do I get home?". Siri opened a map with turn-by-turn directions.
OP
R

Question: When you say 'plugged in' does that mean if your in the car and not plugged into a power supply you can't ask siri to make a calendar appt?

Question: When you say 'plugged in' does that mean if your in the car and not plugged into a power supply you can't ask siri to make a calendar appt?
Click to expand...

You can ask, but you have to manually press the home button to activate Siri instead of doing it hands free by using Hey Siri.

scifan57 said:
You can ask, but you have to manually press the home button to activate Siri instead of doing it hands free by using Hey Siri.
Click to expand...

I remember hearing that one of the next versions of iOS will allow the "hey Siri" functionality even when the phone isn't on the charger.
OP
R

OK, cool, that's still easy.
Weird though it won't listen unless on the charger, I wonder why they did that? Androids still hear 'Hey Google' (even though it doesn't work that great) whether on the charger or not.

To turn on the Hey Siri feature, go to Settings>General>Siri>Allow "Hey Siri" and slide the switch to on.
You must log in or register to reply here.

B
newbie to the iPhone with SEVERAL questions :) TIA

Nov 8, 2011
dorrien12
D
M
Wanting to switch from Android, I have a question about some iOS capabilities