Messages in iCloud is Back in iOS 11.3 Beta 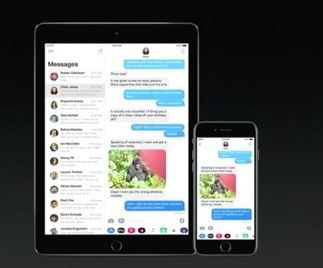 AppleInsider reports today that Messages in iCloud, a feature that was first announced in June 2017 at Apple’s Worldwide Developer’s Conference (WWDC), has now re-appeared in the newly released iOS 11.3 beta, “for testing and evaluation purposes.”

The feature first appeared in the first few iOS 11 betas that were released last summer, but did not make it to the final build that was released to the public. At that time, Apple said that it would be included in a future iOS 11 update.

Apple informed developers that they will be prompted to turn on Messages in iCloud when they first launch iOS after updating to the iOS 11.3 beta 1. It is automatically enabled for anyone who has two-factor authentication and iCloud Backup.

Messages in iCloud synchronizes your Messages “stack” between all your iOS devices. If you delete a message on one of your devices when logged in, then it will delete it from all devices that are connected to the same iCloud account. Also, only the most recent messages would now be stored on your iOS device, with older messages stored in iCloud, ready to be loaded should you want them.

Source: Messages in iCloud returns in Apple's iOS 11.3 beta 1
You must log in or register to reply here.

Apple Releases its Fourth Beta for the Upcoming iOS 8.3 Update