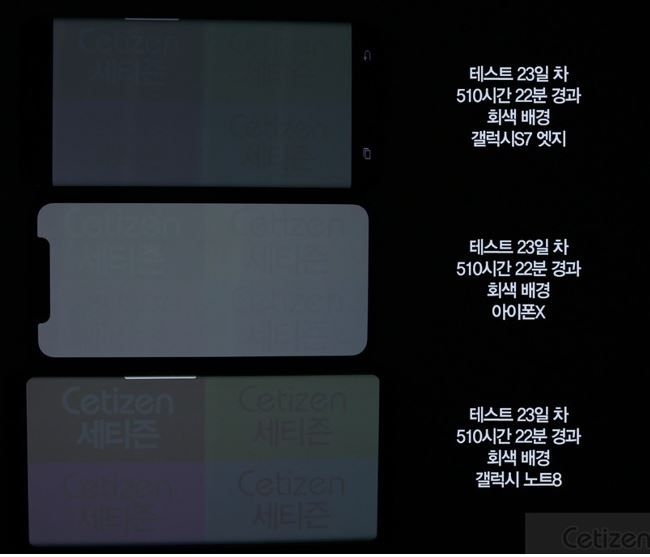 AppleInsider reports today on an 510-hour test recently conducted by South Korean website Cetizen in a bid to test the burn-in capabilities of various smartphone OLED displays. Image burn-in is something that OLED displays are susceptible to, and something that Apple tried very hard to avoid when designing the iPhone X, and judging by the results of this test, it looks like it succeeded.

Cetizen tested the iPhone X, Samsung Galaxy Note 8, and Samsung Galaxy 7 Edge in a bid to find out how long before each of the OLED displays was affected by image burn-in.

The iPhone X was actually the first of the handsets to show very slight signs of burn-in after 17 hours of testing, but surprised the tester by not deteriorating any further beyond that initial, very slight amount, which was said to be so faint that it would not be noticed during daily use.

After 62 hours the Note 8 started to suddenly show very noticeable burn-in characteristics, without any prior warning, while the iPhone X burn-in was still not overly noticeable. The Note 8 showed the worst signs of burn-in of all the models tested, the S7 was the second best, and the iPhone X the least damaged by burn-in after 510 hours of testing.

It should with what we paid for it

B
Do all units of iPhones with oled suffer in screen burn in?