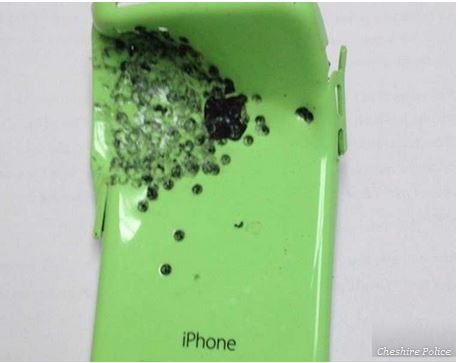 Business Insider has a fantastic story today from ITV News in the U.K. about how a man’s life was saved when his iPhone 5c took the full force of a sawn-off shotgun blast.

The incident took place last October, when the 25-year-old man argued with a gang of teenagers in Cheshire because they had turned off the water supply to the apartment block where he lived.

When the argument got more heated, one of the youths brandished a sawn-off shotgun and shot the victim in the chest. That’s not something that you’d normally survive, but the victim’s iPhone 5c acted as a shield, and as the actual photo of the phone shows, it took the full brunt of the blast.

“This is remarkable—had that phone not been in his pocket at that time he would undoubtedly have died.”

The perpetrator of the crime, Ryan Duggan, has been found guilty of attempted murder, and possession of a firearm with intent to danger life, and will be sentenced on July 10.