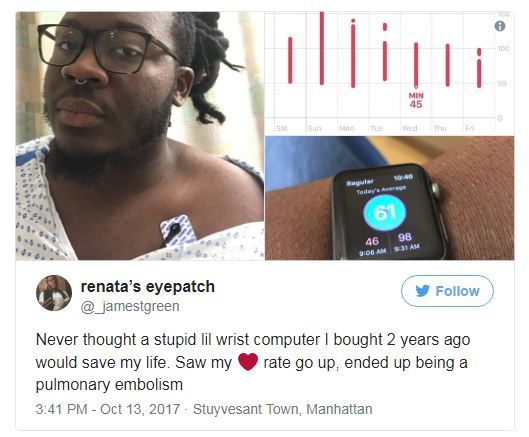 Cult of Mac reports that New Yorker James Green from Brooklyn has his Apple Watch to thank for saving his life by detecting a pulmonary embolism. Twenty-eight-year-old Green says that he bought his Apple Watch because he’s a serial data-tracker and bought it to use it for the notifications and to track his bike rides.

Unbeknownst to Green, he was suffering from a pulmonary embolism, which did not reveal itself with any symptoms. However, when wearing his Apple Watch, the HeartWatch app notified him that his heart rate was unusually high despite him being inactive. On checking some older readings, he realised that he had an urgent medical problem, and on going to hospital the doctors confirmed that he had a pulmonary embolism.

“Never thought a stupid lil wrist computer I bought 2 years ago would save my life. Saw my heart rate go up, ending up being a pulmonary embolism,” tweeted Green.

7 News reported that Green said in a subsequent tweet that he has now been officially discharged from hospital, and that he will now have to be on blood thinners to save his life.

Stories like these are why I find Apple’s research on how the Apple Watch might be used to check for high blood pressure to be so exciting. That is surely the next big step from the company in its bid to make the world healthier, and could affect so many lives around the world.

Man says Apple Watch notification saved his life
You must log in or register to reply here.

Another Amazing Story Shows How the Apple Watch Saves Lives