Are any of you having problems with the Sleep/Wake Button after using the Otter Box Defender Series Case with the iPhone 5? My wife has been telling me hers isn't working properly all the time. Well a friend said he had the same problem and took it to the Apple store. The guy told him that the defender series cases from Otter Box was no good and it pushed in the Sleep/Wake button to far on the iPhone 5 and broke them. Have any of you had this problem or been told this? What cases are y'all using with good results? She has the OtterBox Defender Camo/Orange and loves it but seems to be causing problems.

I just had my 5 replaced last week for this same issue. I'm not sure it was the Otterbox case that caused it but I started out with the Commuter and I always had a hard time with that button in the case. I have since moved on to a thinner Incipio case. Hopefully no problems from this point forward.

crap, just ordered a defender case for my daughters phone that i'm getting this friday, put in a cancel request on amazon and she is now looking at the incipio cases, thanks for the tip and heads up on that, didnt want to get a brand new phone fixed because of a case

The commuter case I have just makes it so I have to really press hard to make it work.

"Be nice to people on your way up because you'll meet them on your way down." - Wilson Mizner

The physical home/sleep button is a perennial issue on many forums. What is SOOOO wrong with a touch home button? Other devices have it. Seems like Apple would have listened prior to the iP5.

EWyatt said:
The physical home/sleep button is a perennial issue on many forums. What is SOOOO wrong with a touch home button? Other devices have it. Seems like Apple would have listened prior to the iP5.
Click to expand...

Apple does have a virtual home button that can be activated by going to Settings>General>Accessibility>Assistive Touch. The button appears in the top left of the screen when you turn on Assistive touch, and can be moved to any location along the edge of the screen. If you tap on it, you are offered several choices, one of which will take you to the home screen. Here's a screenshot. 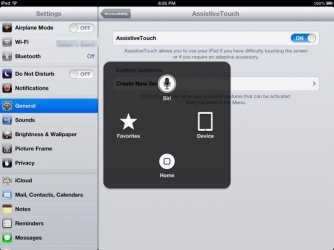 Well I got her the Life Proof case well see how that turns out.

motoman said:
Well I got her the Life Proof case well see how that turns out.
Click to expand...

Let me know how it is. I was just looking at one today...
OP
M

Well she didnt like the life proof at all. Nobody could hear her talk unless the headphone plug and charge flap was open.
I

Just get a Griffin Defender. I have gone through a number of cases and the only problem I have encountered is a bit of difficulty pocketing my Iphone5 because of the rubber finish.
You must log in or register to reply here.

A
sleep/wake button not working.