We welcome front page news additions from our users, but we ask that you format your message in a specific way so that it can be moved to the proper section without any formatting issues.

In order to do this, please follow these rough guidelines.

1. Each news article should contain an image that gives the reader an idea of what the article is about.

3. The image should be attached to your message so we can save it easily.

4. The article should be written in a professional manner.

5. The article should be a news item that a large percentage of our members would find both on-topic and interesting.


Any help in getting more news up is always appreciated!

We haven't verified exactly what's going on here, but we've gotten several tips tonight from people who've received an iPhone 4 pre-order cancellation email from Apple saying that their order couldn't be authorized. That sounds like an AT&T authorization problem to us, and given the the litany of problems that Apple and AT&T had all week dealing with the huge number of pre-orders, we can't say we're too surprised to hear that the chaos continues. Here's the email:
Dear Customer,

We were unable to complete the authorization process for your iPhone
order. As a result, we had to cancel your iPhone order. To complete the
purchase of your iPhone, please visit an Apple Retail Store or an AT&T
company-owned retail store.

We apologize for this inconvenience.

The new Apple iPhone 4 has hit the UK with thousands of gadget fans eagerly anticipating its arrival.

ut others fear it will squeeze smaller firms out of the market.
Luke Peters of T3 magazine said: "One company in particular fearing the arrival of the iPhone 4 will be Flip, creators of pocket-sized HD camcorders.
"With the latest iPhone touting a HD-capable, 720p video recorder of its own, Flip will be worried about its portable HD camcorders becoming less attractive to consumers looking to replace their tech arsenal with a single, all-encompassing device.
"This 'iPhone effect' of a single convergence device replacing the need for several, separate pieces of kit has already become a concern for companies since the arrival of the original Apple smartphone in 2007."
The new handset replaces the iPhone 3GS which launched a year ago and sold over a million units in its first weekend.
However, Apple's most recent hit has been the iPad tablet computer. Over three million iPads have sold since its US launch less than three months ago.
Apple says it has already taken over 600,000 pre-orders for the new iPhone - the most it has ever taken in a single day.
But the new iPhone is facing competition as the next generation of Android-based phones are unveiled.
Droid X goes on sale in the UK on July 15, with Motorola attempting to win sales from Apple.
More than 160,000 handsets that use the Android operating system developed by Google are sold everyday.

Full story can be found here:

Just seen this over at modmyi.com

Our good friends, MuscleNerd and planetbeing, have announced that Comex's Spirit userland jailbreak has been ported to work on iOS 4 and even the iPhone 4!

Before you go asking like crazy, I'll tell you now... There is still no release date, but rather, just great news that our next Jailbreak tool is right around the corner.

Stay tuned folks, our next Jailbreak tool will arrive shortly.

NOTE: This is not the bootrom exploit, but rather another userland jailbreak, which means Apple could patch it in the next update, so make sure you back up your blobs once your jailbroken.

Hopefully we won't have to wait to much longer
J

I know this is off topic, but I dont know if anyone has been watching the soon to release of the Verizon iPhone 4, I was on Facebook this morning when I saw a new iPhone 4 case that looks rather clean contour and minimalist in design. Getting ready pre-ordered my Verizon iPhone 4. I went over to Mivizu and ordered the new Alien EPIX case.

Check it out. I think most people would like the new design.


Mivizu has it available for Pre-Order.

Here is a copy of their PR.

New York, NY  January, 2011  Mivizu, known for its innovative and award-winning stylish accessory case designs for Apple iPad, iPhone and iPod cases, is excited to have collaborated with Mexican Super Model Vanessa Rubio to collectively design the next generation of Mivizu Apple iPhone cases specially for the new Apple iPhone designed to run on the Verizon CDMA platform. CEO, Stanley Lam, we are quite excited to have worked with Mexican super model Vanessa Rubio whom collaborated and provided her signature design ID to our cases and resulted in a fashion inspired, Mivizu Alien EPIX case.

Mexican super model, Vanessa Rubio, I am very proud to have worked closely with Mivizus designers, their philosophy and belief to promote product individuality; to be unique in a world of mass production, Is exactly why I choose to support the Mivizu Alien EPIX signature series. This is why the Mivizus collections are produced in limited quantities, so customers will enjoy a product that is almost one of a kind. And chances are youre unlikely to bump into another one like it. We wanted to define style and fashion and fuse that concept with the need to have a utilitarian iPhone case that retains form, function, and protection while delivering a style that appeals to fashion conscious customers, and Mivizu delivered that.

Established in 2001, Mivizu is a New York-based design house dedicated to styling technology. We ndustry by providing quality products, superior customer service, innovative designs and on-time delivery. Our direct relationship with our factories allows us to provide the most competitive pricing combined with innovative designs and unparalleled quality. Every piece we manufacture is inspected and must pass demanding "AQL" standards. Our factories enable us to expedite the newest and most in-demand products to our customers. With the effort of our brilliant marketing and designing teams, we constantly launch fashionable Mivizu branded cases of premium quality for the latest consumer electronic products, to help our customers stay ahead of the game and ultimately being on top of competition and achieving maximum benefits. 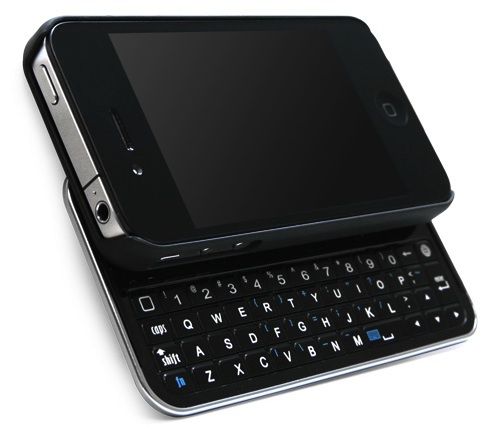 Taiwanese site Apple.pro reports (via AppleInsider) that Apple has been testing three separate prototypes for the fifth-generation iPhone, including one with a slide-out keyboard.
There are three iPhone5 prototype
one is a sliding cover which
Is the introduction of the keyboard after the side cover

Other prototypes are said to be similar to the iPhone 4 except with an upgraded battery and apparently an 8-megapixel camera, up from the 5-megapixel sensor found on the iPhone 4's rear-facing camera. The report likens those prototypes to the transition from iPhone 3G to iPhone 3GS, with the same basic design augmented primarily by improvements in the device's internals.

As for claims of a slide-out keyboard, the rumor seems incongruous with Apple's devotion to multi-touch functionality with on-screen virtual keyboards. Normally, we would simply cast such suggestions aside, but Apple.pro has a strong track record of providing leaked information from Apple's product pipeline. Most recently, the site posted photos of a small Apple-branded touchscreen that appeared a few months later in the company's latest iPod nano.

The site also notes several times that these are prototypes, suggesting that the model sporting a slide-out keyboard could simply a design put together by Apple for the purposes of testing out various form factors, and may never be intended for a public release.

Today's report from Apple.pro also reiterates ongoing claims that the next-generation iPad will be thinner and will carry at least one built-in camera.
W

Apple iPhone 4 is specially designed for a advanced technologic feature for more applications.
I

Fantastic technique of submitting news on front page. Thank you.
You must log in or register to reply here.

How To develop an iphone app & Submit It To iTunes